With A Celebration Carlos Acosta – the incomparable ballet superstar – marks 30 years in dance supported by his own young Cuban company, Acosta Danza, at the Royal Albert Hall

The cavernous Royal Albert Hall is not an ideal dance venue at the best of times. To make matters worse, my press ticket was in the Arena, where the floor is as flat as a pancake, with no rake at all, and each seat is so meticulously aligned with the one in front that one’s sightline consists mostly of somebody’s head. Arena seats at the Royal Albert Hall should be visibly classified as ‘restricted view’ and priced accordingly.

All this to say, my view of the performance was at best partial, and at times amounted to no view at all.

It was as if somebody had decided to invent a torment to match that of the parched ancient Greek Tantalus, condemned by the gods to be within reach of water but never allowed to quench his thirst. I knew there were excellent dancers on that stage, but could never properly see them.

For that reason, this review is partial and I don’t feel I can award a star rating.

The evening started with Mermaid, a duet created by Sidi Larbi Cherkaoui and inspired by the tale of a mermaid who sacrifices her life in the sea when she falls in love with a human. The profoundly expressive Marta Ortega was the mermaid, stunning in a deep red dress by Hussein Chalayan; her lover was Acosta himself, none of his charisma lost even in his mid-forties and two years after retiring from full-time dancing.

The music, with an Asian accent, was composed and performed live on the piano by Woojae Park.

Alrededor No Hay Nada, by the Spanish choreographer Goyo Montero, was danced by five black-clad couples, all members of Acosta Danza. Its sound score was the spoken word: the Roman Catholic benedictions and a snatch from the Book of Genesis followed by the Spanish translation of a long poem by the late great Brazilian musician and poet Vinicius de Moraes, entitled ‘Because It’s Saturday.’

The poem uses Saturday as the explosion of freedom and excess that follows a week of hard work and precedes Sunday as the day of the Lord, where behaviour is expected to be respectful and controlled. Accordingly, the choreography expresses a crescendo of joy and unalloyed pleasure, with big lifts and infectious vitality. However, if you don’t understand Spanish, you’re at a serious disadvantage.

Part 1 ends with Rooster, Christopher Bruce’s modern classic scored on eight songs by the Rolling Stones. For many years a crowd-pleasing staple of Rambert’s repertoire, Rooster is humorous comment on preening young men and savvy young women, and it suits the Cuban dancers to a T; Carlos Acosta struts back onto the stage as the titular rooster.

When the Royal Ballet announced that Carlos Acosta’s last hurrah for the company three years ago would be his own version of Carmen, the question naturally arose, does the world need another Carmen?

The jury is still out on that one. Carlos Acosta has significantly reworked his one-act ballet Carmen, and that makes up the second part of A Celebration. It is now shorter and a little tauter, but keeps his reading of the heroine as less of a femme fatale and more of a victim of fate and the machista culture of Spain, symbolised by a menacing bull figure.

Acosta’s Carmen suits the Cubans and they give it their all, but it doesn’t entirely work, partly because, compelling technicians that they are, there’s little chemistry between Laura Rodríguez as Carmen and Javier Rojas as the hapless Don José.

It’s only when Acosta himself takes to the stage as the bullfighter Escamillo that the tension goes up a few notches. Acosta does swagger like no-one else, and executes his demanding choreography, all jumps and turns, with the power and control of a dancer half his age. The pas de deux between him and Rodriguez is all sizzling sex and desire.

In A Celebration Carlos Acosta has created an interesting and intelligent assembly of works, all of which pass comment on the relationships between the sexes. It deserves to be seen – just not from the Royal Albert Hall’s misconceived Arena. 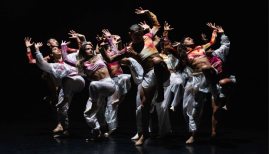 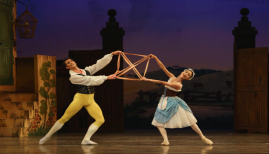