They are technically exciting, committed, fresh and very versatile. And they deserve better material.

Spectrum is made up of five works by a variety of contemporary choreographers.

Of the five Juanjo Arqués’s Portal (pictured top) is the most joyous. A work for seven dancers, whose white costumes are individualised by brightly coloured ribbons, its intention is to explore each individual’s personal threshold and relationship with their problematic homeland.

Set to the pulsating drumbeat of Ariwo’s score, it starts with individuals or couples moving on a darkened stage under the intense gaze of a torch held by another dancer (is it a reference to the all-seeing eye of the state?), but then lightens up and becomes a fluid group dance, infused with the irrepressible vibrancy of the country’s culture.

The Belgian Moroccan choreographer Sidi Larbi Cherkaoui created Faun in 2009 as part of a celebration of Diaghilev’s Ballets Russes. Cherakoui’s Faun is inspired by Nijinksy’s own pionerering L’Après-Midi d’un Faun, set to the eponymous Debussy composition, to which Cherkaoui added music by Nitin Sawhney. 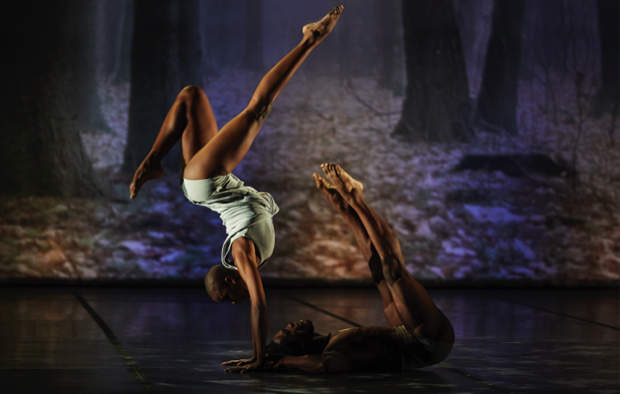 Zeleiy Crespo and Alejandro Silva in Faun, Acosta Danza. Photo: Toti Ferrer
Against a dense forest background, a faun cogently danced by Alejandro Silva writhes on the ground, his acrobatic contortions those of a restless animal. The appearance of an enticing nymph, the imposing, mesmerising Zeleidy Crespo, sets up an extended disquietingly sensual duet, part battle, part seduction.

Crespo and Silva brings us intense unrushed dancing of the highest quality, making this 15-minute piece a stand-out in the programme.

Spain's Goyo Montero is resident choreographer with Acosta Danza. His Alrededor No Hay Nada, which brings Spectrum to a close, is a wry, humorous piece for the whole company. 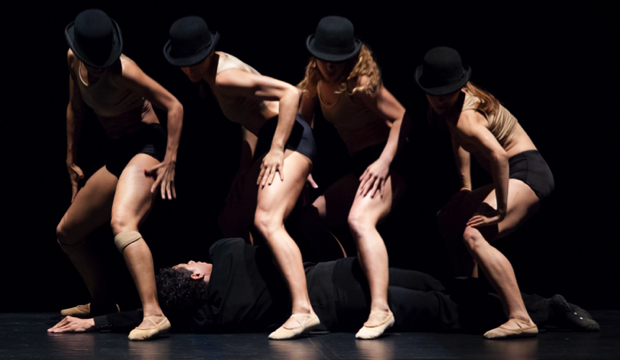 Acosta Danza in Alrededor No Hay Nada. Photo: Polina Koroleva
It’s danced to a selection of poems by Joaquin Sabina and Vinicius de Moraes, declaimed in Spanish; and although there is no immediate connection between movement and voice, it does seem a little perverse to bring an unexplained soundtrack to an audience where many may not be conversant with the language.

That said, it’s an entertaining collection of vignettes, jazzy, fast-moving, peppered with knowing glances at each other and the audience, the dancers again showing their ability to engage easily with different styles.

Dark and danced to a grating industrial score, Taylor’s piece was all jerky aggressive movements leading nowhere, while Nosotros was a derivative, inconsequential five minutes that resisted the best efforts of Laura Rodriguez and Mario Sergio Elias to make it count.