Danish cook and founder of the Skandikitchen Brontë Aurell has revealed her recipe for kanelbullar, or real Scandinavian cinnamon buns. A perfect teatime treat 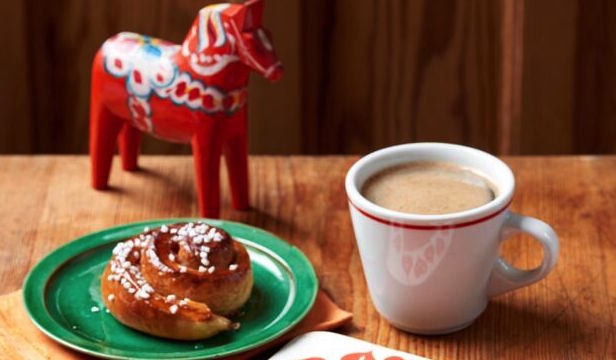 Cinnamon bun recipe: the Skandikitchen cookbook
Cinnamon roll recipes don't get more authentic than this one from Brontë Aurell's new cookbook The SkandiKitchen. Fans of the cult Scandinavian bakery will love being able to make their own traditional baked cinnamon rolls at home.
REAL CINNAMON BUNS: SKANDIKITCHEN RECIPE

We like this recipe because it’s simple, straightforward and it just works. Along with that, it is pretty traditional and doesn’t try to be something it is not. Why complicate a simple, good thing?

*If using fresh yeast, add the warm milk to a mixing bowl and add the yeast; stir until dissolved, then pour into the bowl of the food mixer.

Pour the warm milk into a bowl, sprinkle in the yeast and whisk together. Cover with clingfilm and leave in a warm place for about 15 minutes to become bubbly. Pour into the bowl of a food mixer fitted with a dough hook. Start the machine and add the cooled, melted butter. Allow to combine with the yeast for 1 minute or so, then add the sugar. Allow to combine for 1 minute.

In a separate bowl, weigh out 400 g, add the cardamom and salt and mix together. Start adding the flour and spices into the milk mixture, bit by bit. Add half the beaten egg. Keep kneading for 5 minutes. You may need to add more flour – you want the mixture to end up a bit sticky, but not so much that it sticks to your finger if you poke it. It is better not to add too much flour as this will result in dry buns. You can always add more later. Once mixed, leave the dough in a bowl and cover with a dish towel or clingfilm. Allow to rise for around 30 minutes or until it has doubled in size.

Dust the table top with flour and turn out the dough. Knead the dough with your hands and work in more flour if needed. Using a rolling pin, roll out the dough to a 40 x 50 cm/16 x 20in. rectangle. In a bowl, add the butter, spices and sugars and mix together well. Using a spatula, spread the mixture evenly over the rolled-out dough. Carefully roll the dough lengthways into a long roll. Using a sharp knife, cut 16 slices.

Place the swirls onto the baking sheets (not too close as they will rise further). Leave to prove under a dish towel for 30 minutes. Preheat the oven to 200°C (400°F) Gas 6. Brush each bun lightly with egg and pop the buns in to the preheated oven to bake for around 10–12 minutes. Watch the buns as they bake: they can go dark very quickly and you may also need to move the buns around in the oven if they are not baking evenly.

When golden, remove from the oven. Brush the buns lightly with the warmed syrup then decorate with the nibbed ‘pearl’ sugar or chopped, toasted nuts. Immediately place a damp, clean dish towel on top for a few minutes to prevent the buns from going dry. The secret to making the best cinnamon buns? Love. Lots of it. Knead the love into the dough.