When you’ve lived a life as colourful as Elton John, the made-for-movie-screens melodrama writes itself. Insecurity, loneliness, heartbreak and substance abuse – his vices agree with the kind of musical hedonism that has been universalised for an audience’s greedy curiosity.

Magic can, and so often does, get lost in translation on the big screen. The biopic is a difficult monster to master, as the template squeezes and sanitises its source material to fit the product. But regal showmanship fuels Rocketman's mission, propelling the rousing, heartfelt musical to gleeful heights. No eccentricities are sacrificed to reach the highest stars.

Fletcher plays the orchestra conductor from the get-go, as there’s seldom a feeling felt in silence. The tinkling, wistful motif of Goodbye Yellow Brick Road loops in the jukebox merry-go-round illustrating the picture. Time zips freely along, letting the man grow up between choruses and reprises of so many years of beloved music without ever missing a beat.

Loosely, think of a meeting between Moulin Rouge! and Hairspray, in the way this movie is so proudly built on the house of hits, and relishes the opportunity to give them high stakes through make-believe sound stages and everyday conversations sung entirely in earnest. The results are gloriously camp, edging closer to a piece of polished musical theatre than to a Wikipedia entry with a backing track.

There’s no hiding from John’s shortcomings, which affords the picture a greater sense of gravitas than the frustratingly comparable Bohemian Rhapsody – Fletcher was hired to finish the project, and while the respective musicians were consulting producers on both films, this is where their similarities end.

While the film about Freddie Mercury struggled to do justice to much of the musician’s life beyond his work, the Elton John musical fantasy is stuffed full of so many glittering details that it's almost blinding. 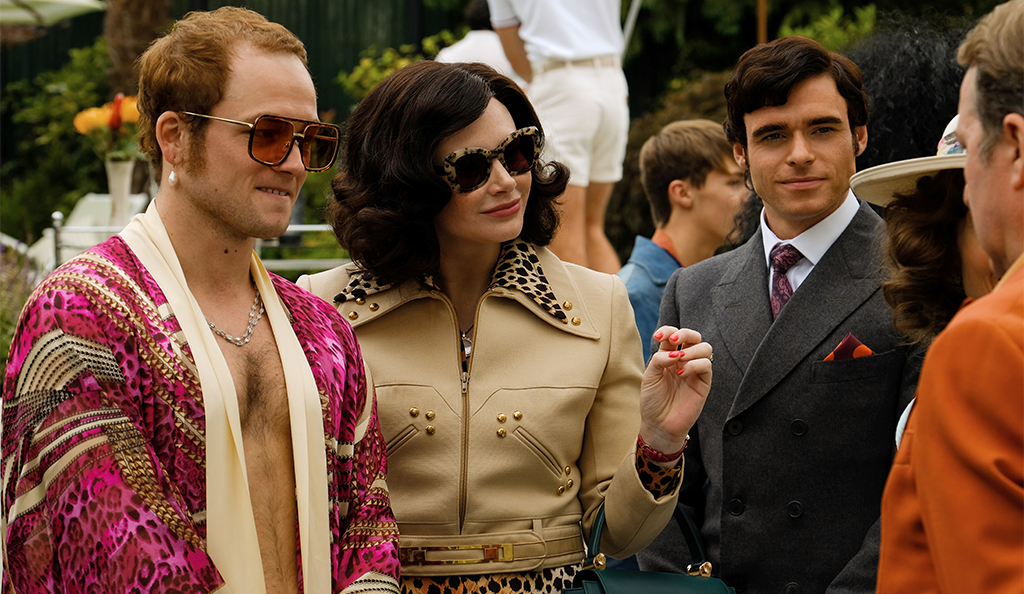 As John, Taron Egerton sings, soars, triumphs. At once the showman, lover, loner, addict and insecure boy called Reginald Dwight who used to be shy, the actor wears a hundred hats and almost as many bejewelled outfits. He packs a million emotions into a handful of stares, successfully communicating complex moments of John’s livelihood when the script sometimes favours the spectacle of his shows.

Egerton is in tremendous company too, as the moments of carnal intimacy with Richard Madden’s John Reid waste no time pussyfooting around the heat that fuelled much of the musician’s early passion, and his friendship with lyricist Bernie Taupin is delicately brought to life with Jamie Bell as a consistently loyal and loving presence. It's an absolute delight to witness unwavering, uncynical friendship between two men that so often is either brutalised or just avoided altogether.

It would be futile to try and dilute the moments, at once fantastical and undeniable, that created the magnanimous cult around Elton John. Fletcher and co. embrace the artist’s joyous ambition, and flirt with just how far the fairytale can go. Rocketman justly honours the life lived larger than the rest with wit, compassion, and so much pizzazz.