New V&A museum exhibition explores the power of design and technology in shaping the future of our world – It's got honourable ambitions, but unfortunately lands a little flat

These big, lofty questions are at the heart of the new V&A museum exhibition exploring the power of design in shaping the world of tomorrow. The Future Starts Here showcases 100 cutting-edge designs and technologies that are predicted to profoundly impact the future of humanity, the environment, synthetic biology, space and life after death. The first exhibition produced by the V&A's new Design, Architecture and Digital curatorial department tackles topical and very pressing matters, and should be praised for its ‘conscious grappling of modernity’. But with so many questions and themes at play, the exhibition lacks coherent direction and is exasperatingly random at times.

TRY CULTURE WHISPER
Receive free tickets & insider tips to unlock the best of London — direct to your inbox
As you enter the exhibition, you are confronted with the ways in which smart technology is shaping life in the home. A monumental baby pink plastic house serves as domestic backdrop to the objects on display. From an intelligent robot that does the laundry and high-tech pal Alexa – Amazon’s voice controlled digital assistant – to a cot that rocks your baby to sleep, the increasingly blurred lines between humanity and technology are explored in intricate depth. Bento Lab, the first complete portable DNA laboratory takes pride of place as does a new 3D microscope from Nanotronics. The microscope examines materials at nanoscopic level, transforming them into 3D images that users can then navigate using a gaming device; it is a terrifying vision of the future, but really quite remarkable. 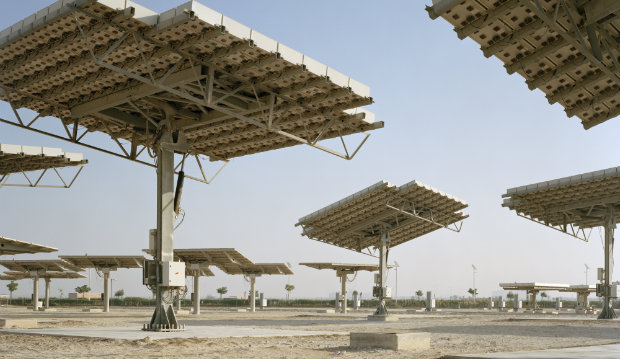 Split into four distinct zones – Self, Public, Planet and Afterlife – the exhibition boasts a diverse array of objects spanning disciplines and mediums gleaned from research labs, design studios, aerospace centres and development laboratories around the world. There’s everything from Foster + Partners’ gigantic architectural model of Masdar, the world’s first carbon-neutral, zero-waste city, to Facebook's Aquila, a solar powered aircraft, which aims to bring affordable connectivity to unconnected regions around the world. Cedric, Volkswagan’s first driverless car, is also a star piece. But with so much on show, the Sainsbury Gallery is transformed into a sensual minefield. Clustered objects mounted in glass vitrines fight for attention with looming trees, large-scale video screens and interactive installations.

As you move from exhibit to exhibit, it is unclear which ideas are being addressed at any one time. One minute you’re confronted with the future of democracy via Cambridge Analytica video footage, the next, the grave socio-political issues posed by an international social housing crisis. You unwittingly become embroiled in a multi-sensory global debate that confronts every issue under the sun without providing any of the solutions. 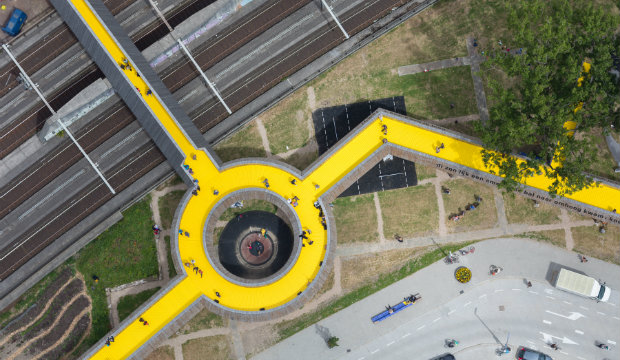 Despite moments of brilliance – Hanif Shoaei’s touching images of a couple on their phones in bed with their backs to each other highlight just how lonely we can be in a hyper connected society – the poignancy of their tale is somewhat lost. With futuristic sound effects, gimmicky sand-pit installations and ipads galore, it feels, at times, like a haphazard children's playground. The childish undercurrent is further emphasised by the final exhibit. Before leaving, we are invited to spell out our own future with little plastic letters. The irony is not lost: design may shape our future but it won’t determine it. For now, at least.

It’s refreshing to see an exhibition exploring a near future rather than a distant past, but, quite frankly, it’s exhausting. 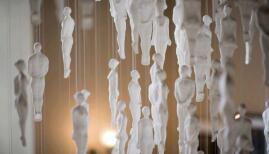