Shimmering portraits of a nation: the first major UK retrospective of Joaquín Sorolla’s work in 100 years comes to the National Gallery

4 CW readers are interested
Sorolla: Spanish Master of Light, National Gallery review 4 Sorolla: Spanish Master of Light, National Gallery review Kristina Foster
‘I hate darkness’ Joaquín Sorolla once said, ‘we painters, however, can never reproduce sunlight as it really is. I can only approach the truth of it’. Light, for Sorolla, was a kind of truth; it was the dazzling azure of the Valencian coastline, the glistening bodies of bathers, the sheen of satin, the reflective pools in Andalusian courtyards, an Ibizan rockface set ablaze at sunset; light, for Sorolla, was Spain.

It is hard to believe that an artist who achieved such an astonishing level of international success during his lifetime is relatively unknown in Britain today. With a career squashed between the death of Goya and the birth of Picasso, Sorolla’s work has largely been eclipsed by two bastions of Spanish art. A new exhibition at the National Gallery wonderfully illuminates an underappreciated interim in which the Impressionist was prolifically painting a new modernist language.

It was a language that is distinctly Spanish. Sorolla painted quickly, emulating the technique of Velázquez in finishing vast canvases in under two hours. The result is an urgency which came to define modern aesthetics. Curator Chris Riopelle explains that the key artists of the period ‘all looked forward to Spanish painting as a road to modernism’.

Each of the seven rooms in the exhibition walks us through the artist's personal relationship with his country – from coastal scenes in his native Valencia to the Arab architecture of the Alhambra and Alcazar. All of these are bound together through a continuum of the technique which he mastered: the manipulation of light through paint.

Early on we are introduced to Sorolla’s social subjects. Painted during the 1890s, when the last vestiges of Empire collapsed, these works attempt to depict the reality of hardship in the country. Some, like Sad Inheritance! (1899) threaten pessimism. The black robe of the priest dominates the foreground, around him are fragile, salmon-coloured figures of disabled children who he helps into the ocean to bathe. The great virtue of Sorolla’s realism, however, is that unlike Goya’s vision of a decaying world, he never descends into despair. This vulnerable painting captures an act of charity which demonstrates a faith in mankind and a hopefulness in the rustic traditions of Spanish life. 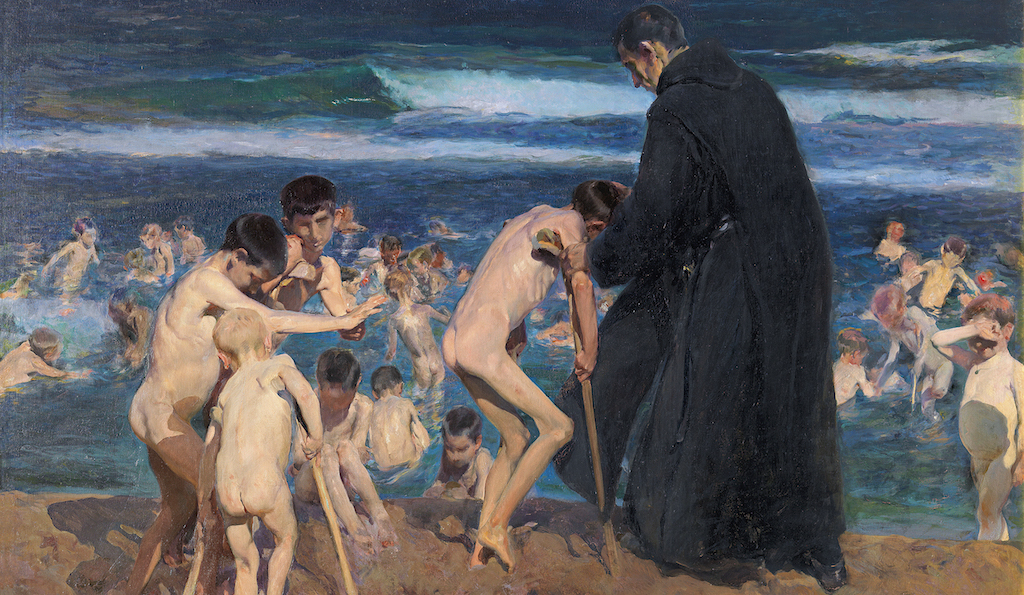 This optimism triumphs in other works in same room, such as The Return from Fishing (1894) which depicts Valencian fisherman heading towards the shore, their rotund sails full of wind, even if their nets appear empty. Sewing the Sail (1896) shows women playing their part in coastal life. A white sheet directs the eye down the canvas as it meanders down like a river, highlighting Sorolla’s mastery of perspective and composition.

This visual intensity is continued in the next room where we come face to face with the painter at his most recognisable; those works so luminous that you feel the urge to shield your eyes. These seaside scenes are beaming with innocent joy. Children’s clothes billowing in the wind generate a sense of energetic motion in Running along the Beach (1908) and wading figures seem to dissolve under the shimmering sunlight in Afternoon at the Beach in Valencia (1904). Notice, as well, the painter’s great skill in modulating opalescent tones of violet, mauve, and light blue to create the feeling of movement. ‘It is this technical proficiency that marked him out as a painter’ explains Riopelle. 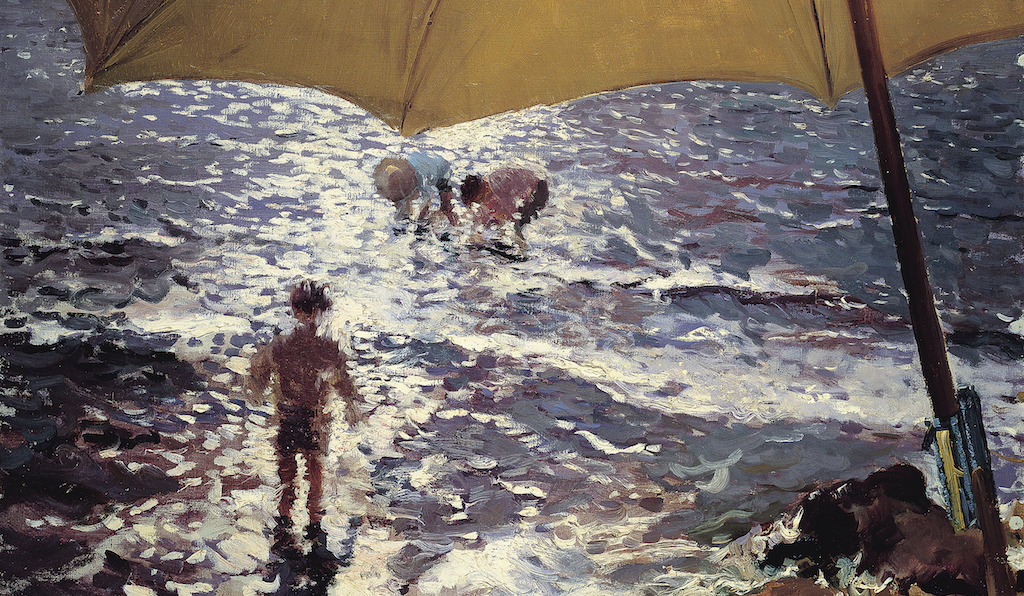 The exhibition also showcases Sorolla’s role as a chronicler of Spain’s regions. In 1911, he was commissioned to create a vast series of mural-like paintings entitled Vision of Spain for the library of the Hispanic Society of America in New York. From 1911-1919, he travelled across the country, painting a record of its different traditions and costumes. Sorolla meticulously recreates the white lace of mantillas, the dark blacks of woollen capes and skirts trimmed with bright golds and deep reds, all the while managing to capture the personalities of his models. We see the timid expression of a young bride peering out at us in Types from Roncal (1912) and in Types from Salamanca (1912) a man stands with his hips haughtily cocked to one side.

No doubt the first major UK retrospective of Sorolla’s work in 100 years will allow the artist to break out of obscurity. It is immensely pleasurable to gaze upon these sun-drenched canvases which are brimming with Impressionist effervescence.