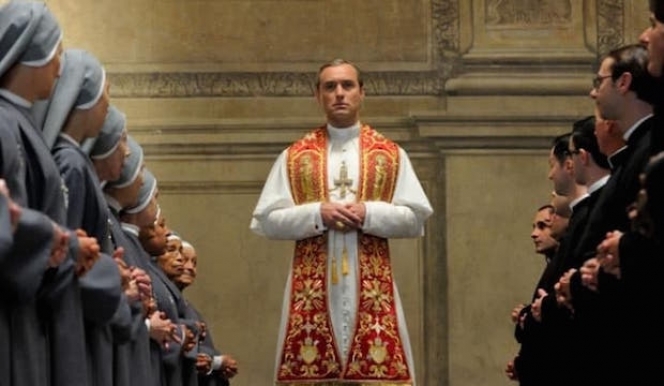 A wise man once pointed out, 'absolute power corrupts absolutely'. Had John Dalberg-Acton been able to see into the 21st century, he might have added, 'and the abuse of absolute power makes for gripping TV'. He would have been right.

There is barely a TV show on now that isn't about the abuse of power: how to get it, how to maintain it, how to escape from it. From Game of Thrones to Wolf Hall, multi-million dollar blockbuster dramas are all about devious men and women on hunt for influence and control. For directors, this means a historical setting, resulting in glittering period dramas like The Tudors and (the absolutely unwatchable) Versailles, or creating a fantasy universe such as Humans on Channel 4. There isn't a lot of real absolute power in today's Western world that can be abused and dramatised, you see.

Director Paolo Sorrentino has found a solution in The Young Pope, his Sky TV series set in the one place where absolute power can be found today: the Catholic Church. The Pope holds the hearts and minds of more than a billion people on this planet in his soft and powerful hands. Imagine if he could be corrupted. Imagine if he was a bad to begin with. Imagine if something along the lines of the Borgia Popes returned to St Peter's today. It's fantasy, sure, but it's not outside the realm of the possible.

Sorrentino's young Borgia-esque Pope is Lenny Belardo (Jude Law), a conservative American cardinal in his 40s who becomes the first American Pope in history and styles himself 'Pius XIII'. His sinister rise to becoming The Holy Father was the result of a failed attempt by his mentor, Cardinal Michael Spencer (James Cromwell) to secure the role for himself through Machiavellian means.

Impassive, softly spoken, and probably asexual, Belardo's first few hours in the Vatican are marked by a reversal of the spoking ban introduced by his predecessor John Paul II, the humiliation of the batty old cook, whose food is rejected in favour of a Cherry Coke Zero, and the order to have rooms set up so that he can inspect the presents sent to him. Law's Belardo is the perfect villain: thoughtful, hungry, and hateful. Law gives Belardo buckets of gravitas, imbuing his every look with darkness, cruelty and deliberate action. What a treat to have a hollywood superstar on TV.

Law's Belardo begins a slow and delicious dance for power with long-serving Cardinal Voiello (Silvio Orlando) across vast mahogany desks in large echoing rooms. Voiello had hoped to be the power behind the throne; to be the Thomas Cromwell to Belardo's Henry VIII, and now the poor man may well be facing the same end without having ever having influenced anything at all. Where Cardinal Voiello is calculating and intelligent (with a weakness only for the beguiling sexual allure of a 2,000 year old statue), others in the Vatican are simple or honest or silly, and must be manipulated with means other than open confrontation.

To quote another great man who knew a thing or two about control: 'knowledge is power'. And so the Pope begins collecting as much information as he can about those around him. He orders Voiello's priest-confessor to break the secrecy rule and reveal the Cardinal's sins. He installs an intimate secretarial post to an ageing nun, his surrogate mother, who looked after him when he was first orphaned as a child. Sister Mary (Diane Keaton) is a blistering hypocrite and a powerful ally for Belardo, convinced that he is 'a Saint... by which I do not mean a good man, but literally a Saint'. In the Vatican, the line between good and evil can be easily blurred by those at the top. After all, 'bad' may actually be 'good' if that is God's will – and who knows God's will better than the Pope?

Power, deception, and a hint of the dark magic that comes when divine right and holiness are sprinkled into the mix: The Young Pope has it all and more. Seductive performances from the diverse cast and the sumptuous Italian setting makes The Young Pope a true pleasure to watch. This is absolute power and corruption – and therefore TV – at it's best.