One of these movies fails the Bechdel test (but can you guess which?) 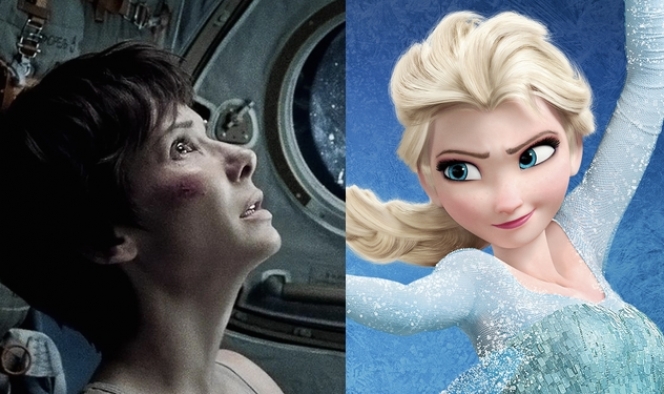 One of these movies fails the Bechdel test (but can you guess which?)

‘What makes a strong female character?’ As a 15-year-old feminist film-lover this is a question I ask myself every time I sit down to watch a movie. American cartoonist Alison Bechdel must have been pondering something similar when she invented the Bechdel Test back in 1985.

To pass her sublimely simple yet oh-so telling test for gender equality, a film must include at least one scene in which two women have a conversation about something other than a man. Hitherto, astonishingly few mainstream movies have passed the test – but, perhaps even more surprisingly, new research has demonstrated that films that make the grade do better at the box office.

The figures, extrapolated from research carried out by US stats genius Nate Silver on fivethirtyeight.com , reveal that the average gross return for a film that passed the test was £1.61 per dollar spent, compared to £1.47 for a film that flunked.

Bechdel may not sound like it asks very much, but many of the best-loved films of my generation do not pass it, including most of the Harry Potter films. J.K Rowling wrote female characters who were not only intelligent and strong-willed, but also flawed and loveable. Yet it is near impossible to find a scene in which they talk to each other. And despite having thoroughly enjoyed The Grand Budapest Hotel , Wes Anderson's most recent cinematic marvel of detail and composition, I couldn't help but feel a little...disappointed. The film is full of wonderful characters, but only three or four of them are female, and none of them have independent relationships with each other.

After nursing a brief desire to raise a radical Marxist-feminist army and storm Warner Bros, DreamWorks and the rest, I reflected that realising the writers, directors and producers you admire haven’t bothered to achieve the barest minimum imaginable in gender representation is, to say the least, discouraging. With only 10% of those key film-making roles being filled by women, it’s also unsurprising.

Yet I've also come to realise there is something more important than ticking the Bechdel box. Gravity , for example, doesn’t make the grade, despite receiving several prestigious film awards and being carried virtually single-handedly by an older female character.

In fact, Alison Bechdel’s test is by no means fool-proof. It is perfectly possible for an otherwise ‘feminist’ film full of well-rounded female characters to fail, and a film with poorly developed, stereotypical female characters to pass. For female film-goers of my generation, the key to a ‘feminist’ film is not merely how visible the women and girls are, but what they’re like once they get on screen.

Last year Frozen won plaudits for Disney because it featured strong female protagonists who aced Bechdel. However, what I seriously disliked about this film was the way it regurgitates cardboard cut-out female stereotypes which bear no relation to real women. Hitchcock had icy blondes; indie film-makers favour the ‘Manic Pixie Dream Girl’; Dr Who’s Steven Moffat can’t resist ‘feisty’ mini-skirt wearing assistants. Now Disney has joined the club, with their hyper-active, optimistic but most importantly, completely unflawed princesses (think giant neotenous eyes, a button nose and rosebud lips). Frozen’s princess looks far less like an actual human girl than Beauty and the Beast’s Belle, a film made nearly 25 years ago.

Tavi Gevinson is the editor-in-chief and founder of teen website Rookie , and a heroine for girls my age. In a TED talk she gave in 2012, she explains why strong female characters are so important. ‘I think the question of what makes a strong female character often goes misinterpreted, and instead we get these two-dimensional superwomen who maybe have one quality that's played up a lot, like a Catwoman type, or she plays her sexuality up a lot, and it's seen as power. But they're not strong characters who happen to be female. They're completely flat, and they're basically cardboard characters […] In actuality, women are complicated, women are multifaceted – not because women are crazy, but because people are crazy, and women happen to be people. So the flaws are the key. […] What makes a strong female character is a character who has weaknesses, who has flaws, who is maybe not immediately likable, but eventually relatable.’

As a teenage girl, it’s all too easy to grow up fearing the world expects you to be perfect. So if Disney is box-ticking Bechdel, perhaps it’s time to raise the bar again and demand female characters with flaws, complexity and depth too.