New Cookbooks 2015, Benares recipes: Fancy a challenge? Try this Atul Kochhar recipe from his new Benares cookbook – sure to impress anyone and everyone! 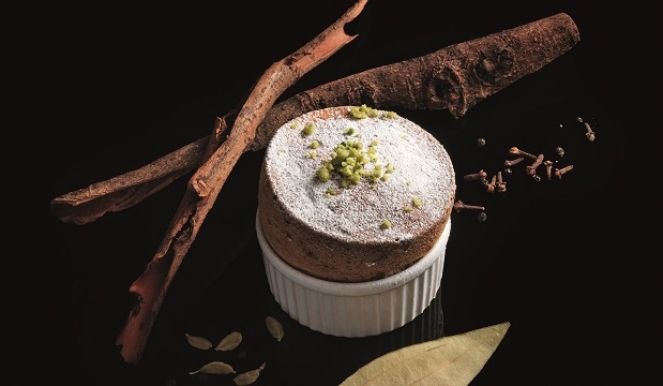 Atul Kochhar Recipes, Photography © Mike Cooper
In 2001, At only 31 years of age, Atul Kochhar famously became the first Indian chef to receive a Michelin star. Since then he has gone to maintain this outstanding standard in his first solo venture, Benares restaurant, London. His beautifully presented, modern Indian cooking has wowed all over the world, and now he's ready to wow again with the Benares cookbook – surely set to be one of the best new cookbooks 2015 has offered.

These stunning Masala Chai Soufflés might be just the dessert you're looking for to spice up your summer menu.

Masala chai is something we Indians can drink all day during winter months. We believe that it gives us warmth – and this dessert gives me feeling of home that’s warm and full of love.

Make the pistachio crumble up to 4 days in advance and store in an airtight container. Preheat the oven to 160°C/Fan 140°C/Gas 3. Place all the ingredients in the bowl of an electric mixer fitted with the metal blade and pulse until it forms the texture of breadcrumbs. Spread out in a baking tray lined with a non-stick oven mat and bake for 8 minutes, or until it colours slightly but doesn’t turn brown. Tip out of the tray and leave to cool completely. Transfer to an airtight container and set aside until required.

Make both the masala chai and the pastry cream up to 24 hours in advance and chill in a covered container until required. To make the masala chai, put all the ingredients into a saucepan, slowly bring to the boil and boil for 5 minutes. Remove the pan from the heat, cover with clingfilm and leave to infuse for 10 minutes. Strain into a bowl and discard the flavouring ingredients. Set aside to cool completely. If not using immediately, cover and chill.

To make the pastry cream, mix the egg yolks, sugar and flour together in a heatproof bowl, whisking until the sugar dissolves, then set aside. Return the strained masala chai to the boil, then whisk it into the egg yolk mixture until smooth. Return this mixture to the pan and simmer over a medium heat for 1–2 minutes, whisking constantly, until it is thick and leaves the side of the pan. Transfer to a clean bowl, press a piece of clingfilm on to the surface to prevent a skin forming and set aside to cool. If not using immediately, transfer to the fridge when cool.

When you are ready to bake the soufflés, remove the pastry cream from the fridge in enough time for it to come to room temperature, if necessary. Preheat the oven to 190°C/Fan 170°C/Gas 5. Grease the side of four 175ml ramekins with butter and coat with caster sugar, tipping out the excess.

Whisk the egg whites with the sugar in a large bowl until soft peaks form. Fold in the masala pastry cream. Transfer the mixture to a piping bag fitted with a 2.5cm plain nozzle and pipe it evenly into the ramekins. Place the ramekins on a baking sheet and bake for 10 minutes, or until risen and golden brown on top. Do not open the door until they are risen.

Have the decorations arranged on the plates before the soufflé
s finish baking. When the soufflés come out of the oven, dust with icing sugar, sprinkle with the pistachio crumble and serve immediately, with ice cream and pistachio crumb on the side.