Michael Rosen, children's poet and storyteller, chats to Culture Whisper about poetry, trains and pretending to have read Joyce's Ulysses. 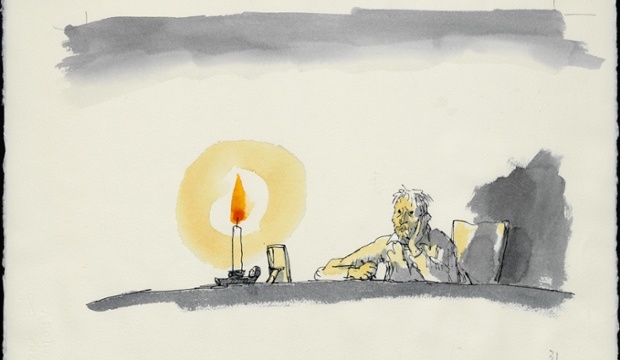 Children's Writer Michael Rosen Interview
We sat down with author, broadcaster and activist Michael Rosen in a hot Portakabin in Suffolk, under the beating sun and against a dull throb of bass-line.

Rosen had just given an hour's reading at Latitude Festival's poetry tent, followed by a two hour book signing, where a disorderly queue of children and vaguely hungover parents had squabbled to meet their hero, followed by an hour long interview with The Guardian. You'd have forgiven him for being a little tetchy. But Rosen was patient, warm and gently erudite; like the best English teacher you never had.

His books are just wonderful - big adventures which teach kids about life; stories like We’re Going on a Bear Hunt, Wouldn’t You Like to Know, and Quick, Let’s Get Out of Here and Michael Rosen's Sad Book, which examines bereavement after the death of his son and is illustrated by Quentin Blake. Rosen was made Children's Poet Laureate in 2007, and presents BBC Radio 4's Word of Mouth.

We sat down with him to talk about poetry, trains and pretending to have read Ulysses.

What is your definition of poetry?

You can ask, 'what are the characteristics of a poem?' Poems are things where quite often, but not always, people try and say big things in a small space. Quite often they have ways in which they make you want to remember it, whether that's repetition, or rhyme.

What is your favourite place to write?

These days, it's my office. I do really like to work there, I can see some old gasworks, and a factory and a park.

But I also work on trains and buses, I like the movement and the fact you're not attached. You're neither one place, nor the other; you're on your way. And, funnily enough, that does free you up.

What would you be if you weren't a poet?

Is there a poet from any age that deserves more attention, and why?

Yeah, there are a lot. Langston Hughes. He made such an incredible contribution to opening and changing poetry, and also expressing such an important moment in American history; world history. This terrible thing that happened, the African diaspora has affected us all. It changed the face of the world as a consequence of slavery. It cemented xenophobia and racism.

Langston Hughes spoke with such beauty and power and strength. There's this poem called I, Too, Sing America. It's so simple and so powerful. People say poetry has to say beautiful things, or has to rhyme. I, Too is just two short verses that express this moment where an African-American can talk back. At the presidential inauguration, the patriotic spectators sing. This is Langston Hughes saying, so do I.

What poem would you have read at your funeral?

It wasn't written as a poem, it was just part of a speech. Some people  know it in a different order, some people know it as socialist not communist; some people think that trade unionist comes first. But the spirit of the poem, which has become proverbial and has entered global consciousness, is that unless we stand up and speak out when someone is being discriminated against, the dial will come round and we will be the victims. Everyone suffers, not just the jews or communists or trade unionists.

Paster Niemöller began as a Nazi sympathiser, but he ended up speaking out and being imprisoned. That takes a humanity which leaves me in awe. So -  please read that.

What is your favourite first line of an poem?

I heard a Fly buzz - when I died. Emily Dickinson.

Is there a book or poem that you've always pretended to have read, but haven't?

I did for years I said I'd read James Joyce's Ulysses. But then I actually did read it. At school I'd pretended I'd read Caesar's Commentarii de Bello Gallico. I never did read those...