WEST END TRANSFER: Boldly reimagined yet subtle, Robert Icke's Oresteia is a triumph with high quality performances all round. 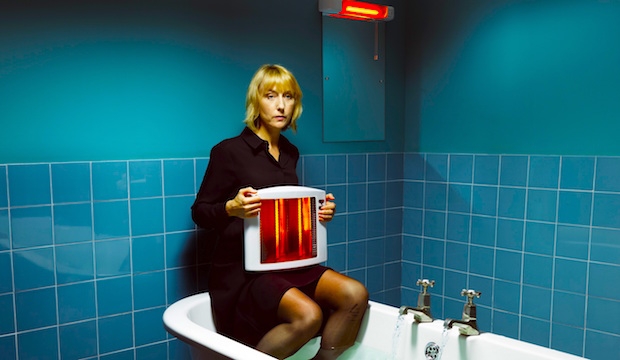 The Almeida Theatre is 'taking the Greeks out of the attic' and this ambitious new season begins with an epic, three hour and forty minute adaptation of Aeschylus' Oresteia. It's enough to make even the most culture-hungry theatre fan yawn.

But Robert Icke's utterly up-to-date and completely compelling take on the bitter tale of revenge is a triumph. Never has four hours in a theatre on a sunny Friday gone so fast. We were riveted throughout, and swung between fascination, tears, laughter and wonder. Split into three with tautly timed breaks, the play reflects the trilogy of its original, but also uses this triple structure to shift the tone and mood.

It's a rich, complex story, in which one murder triggers a ripple effect of revenge and rips a family apart (for more on that read our preview), but this production celebrates the intricate moral web and makes the dilemma feel alarmingly relevant. On the modern stage, Greek tragedies run the risk of dissolving into hysteria and numbing the audience; there are so many horrific things happening it becomes hard to care. Oresteia has more than its fair share of trauma and horror, but the emotional intensity is handled deftly with an expertly paced production that balances the catharsis with the quotidian rhythms of domestic life.

In a slickly updated aesthetic, the tragic figures feel real as well as mythic. A meal beset by bickering renders the cadences of family life so vivid and relatable it feels more like candid camera than ancient text. The minimalist set, all glass sliding doors and Heals catalogue type furniture, feels like any elegant London home, then proves unexpectedly dynamic, shifting between public and private space. An increasing duality in the narrative, as mourning son Orestes' flashbacks punctuate the drama, climaxes in an enlightening and ingenious twist that unsettles everything you thought you knew from the previous three hours' of action.

Performances were stupendous quality all round and expertly sustained for almost four hours. Lia Williams is convincing across an astounding range of emotions and makes the mother shine in a classic text previously weighted with patriarchy. When asked what she feels about the war "as a woman," her Klytemnestra quips, with whip-quick timing and a withering look: "I find that phrase disquieting".

It is, however, the visionary reworking of the ancient tale and the stark poetry of the modernised language that is the star of the show. "We are alive in a time that has mountains of dead words" Agamemnon says in just one of the script's many striking moments of lucidity. The brilliance of this reworked Oresteia is how it excavates an ancient tale, making it not just alive, but heart-wrenchingly gripping and deeply moving.

Four hours and an audience hungry for more: It will be a challenge for the rest of the Almeida's Greek season to maintain this exceptional standard.

UPDATE: Oresteia will be at Trafalagar Studios from 22 August to 7 November. Click here to book.