Absorbing, challenging and entertaining, this immersive game is unlike anything we've experienced on stage. Lucy Brooks reviews World Factory. 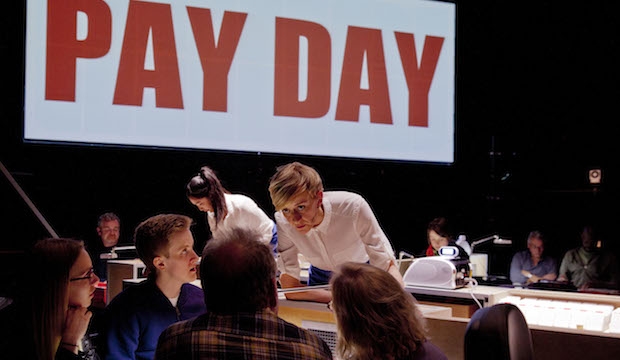 World Factory at the Young Vic: photo by David Sandison
If you're expecting to be passively entertained, think again: this bold new fusion of performance and immersion is no standard show. World Factory makes the audience the protagonist, barraging you with a stream of conundrums, both moral and financial.

The various strands of fashion, politics and humanity that make up the global textile industry are woven together into an engaging introduction. Four performers sashay down the catwalk, impersonate Thatcher and Reagan and perform verbatim interviews with real factory workers. Recorded scenes from inside clothing factories are projected on to the walls and the intimate Maria performance space is set out in clustered table seating and office chairs.

After this introduction, the onus is on the audience. Each table is in charge of a new factory in China, which is brought to life with loving detail: we were given a booklet detailing all our imaginary employees, a wad of cash, and an instruction booklet.

The challenge is to keep the factory in profit for a year (condensed into one hour game time). Every few minutes an actor presented us with a card detailing a dilemma. The pressure is on as you have to think fast and make decisions over workers rights, production quality and spending.

The dramatic themes introduced in the play are made literal. Thoughts aren't just provoked; they are constantly challenged. And as part of a team with fellow audience members you not only consider your own ideas, but must debate them.

Teams begin with the best moral intentions but as the pressure kicks in, get swept away with the competitive game element. In the name of profit, players soon vote for child labour, bribes and unfair pay. The detail and thought that has gone into this game is astounding -- the possibilities held on the cards are endless and each decision has its own repercussion.

Not only does this innovative game structure make for a compelling evening, it negotiates a fine balance of exploring real issues, without feeling preachy. We weren't told to care about the workers' conditions, we were made to care. And this is where World Factory shines as a piece of theatre. The traditional boundaries between audience and subject matter are smashed: we are implicated in the web of the show.

Happily, for those that fear the forced involvement of immersive productions, the performance is left to the professionals, but it's up to the audience to mastermind their own dramatic trajectory. It's not for everyone, but this experimental production is a testament to the capacity for theatre to change our perspective on the world around us.

World Factory is on at the Young Vic until 6 June. Click here for more information and to book.