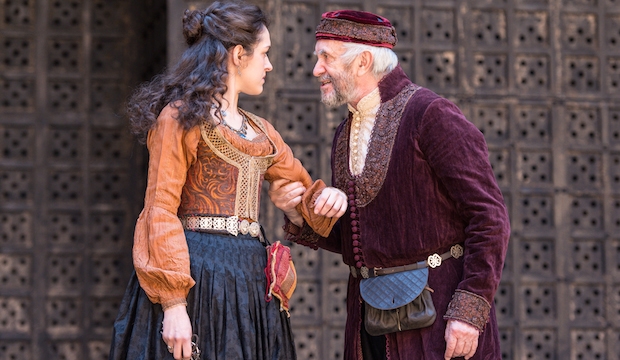 Phoebe Pryce (Jessica) and Jonathan Pryce (Shylock) in Jonathan Munby's production of Merchant of Venice - photo by Manuel Harlan.
It's not often you laugh out loud at Shakespeare. There're always the intellectuals whose deep familiarity with the text require them to titter at the wordplay, in an anxious display of knowledge. But, for a modern audience, the jokes are usually witty rather than hilarious.

But Jonathan Munby's production of Merchant of Venice had the Globe roaring with laughter. Delightful touches such as a drunken vomiting Grassanio (David Sturzaker), audience participation and wry asides make the magic of Shakespeare's text accessible and engaging.

As a particularly confident and clown-like Lancelot Gobbo Stefan Adegbola had the audience rapt, plucking out groudlings, bringing them on stage, and getting us to chant along. The casket scene as three suitors try their luck at winning Portia's hand is potentially flattened by repetition, but it was kept lively through caricatured accents and costumes, then a shift in tone to a sincere Bassanio (Daniel Lapaine), shaking with nerves and excitement.

A luminous Portia (Rachel Pickup) dressed in gold like a trophy and loyal Nerissa (Dorothea Myer-Bennett) gave a modern tone to female friendships as they dismissed potential suitors with sassiness. Then their sharpness and quick-wittedness in court is brought to the wedding scene, where it's made clear that the women are very much in charge.

But while the woman are strong, it's Jonathan Pryce's Shylock that dominates. In his debut at the Globe, Pryce gives an exquisitely nuanced portrayal of one of the most complex characters in the Shakespeare canon. Depending on interpretation Shylock can be a bloodthirsty, bitter villain who provokes boos and hisses or a tragic victim of anti-Semitic hate.

Pryce brought out the pathos, with a 'hath not a jew eyes' speech that us shiver. But he didn't underplay the appetite for revenge. There was a darkly funny glee in the courtroom scene as he meticulously set up his scales ready to measure out the pound of flesh.

The full force of Shylock's enforced conversion to christianity, and its repercussions, came from Pryce's real life and stage daughter Phoebe Pryce as Jessica. The attempt at a neat comic double wedding ending is shifted to the penultimate. Just as we expect to start clapping, Jessica gives a heart-wrenching cry of anguish, casting focus back to the anti-Semitism that haunts the script and reminding us of the alienation of an enforced change of faith.

While Munby's production gives us comedy in bucket loads, his addition at the end of the show gives a clear sense of the weight of tragedy too. It's shylock that has the last word. "Amen" he says in an agonising symbol of defeat that stays with you long after the last rounds of applause.