Sam Holcroft breaks the rules with an uproarious and acutely observed comedy that collapses into chaos, writes Lucy Brooks 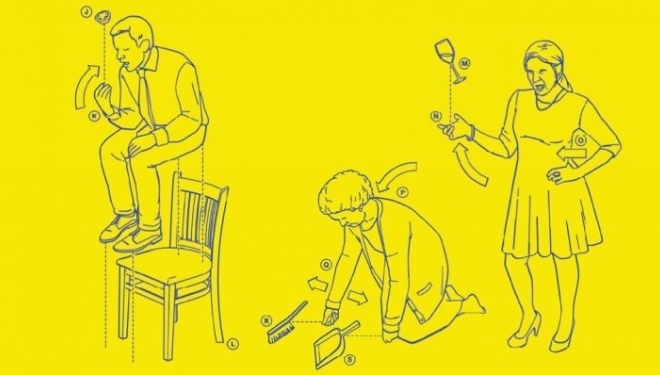 Review: Rules for Living, National Theatre [STAR:4]
The malleable Dorfman stage is thrust out in the round, and we become voyeurs to an open plan kitchen and living area at Christmas, lovingly detailed to look utterly 'normal' -- until you take in the board game structure, with a Monopoly style 'start' section and light up scoring boards framing the performance space.

As a family gathers for Christmas lunch, more brilliant banality is built through awkward comedy and kerfuffles over peeling carrots and forgotten cranberry sauce. Then, the scoreboard flashes into illumination to add a new dimension: a 'rule' by which each character must then abide. These orders, initially trivial, lend an audience a knowingness, shading otherwise normal actions (sitting down, standing up, drinking) with hilarious significance and pre-emptive irony. Thanks to the preordained rules we know, for instance, that if Matthew sits down he is about to tell a lie, and soon these basic actions take on their own comedy.

It's the type of uproarious humour that normally only comes from knowing someone too well, as the 'rules' expose each characters' habits and quirks. These little maddnesses are brought out with perfectly pitched performances: Miles Jupp (Matthew) and Stephen Mangan (Adam) capture the peculiar regression of adults returning to the family home with their trademark comic flair; Claudie Blakely's overwrought wife/in-law Sheena and Deborah Findlay's mighty matriarch Edith were both vivid portrayals of tension; but it was Maggie Service's performance as out-of-her-comfort-zone comedian Carrie that stole the show with an insurmountable urge to crack a joke, regardless of the situation.

The elegance of a game structure gives Sam Holcroft's script sparks of spluttering laughter and moments that prickle with real life awkwardness.The intertwined themes of game-playing and human relationship are knotted together neatly through the idea of rule: the titular "Rules for Living" come from behavioural psychology theory; and the point-scoring element is made literal in an increasingly hysterical family card game.

When the stakes of play are raised the second half, Christmas lunch spirals into mayhem. Inevitably, the 'rules' by which the characters must communicate are ramped up to the ridiculous. Interactions lose their nuances. It's the rules that, well, rule -- and the standard family tensions and personal pitfalls grow murkier. As far as farcical histrionics go, the show is well handled, with deft direction from Marianne Elliott ensuring that the slapstick doesn't render the conflicts insignificant. But as the sharp snappy dialogue of the first half unravels, Rules for Living loses its punch. The card game in particular feels a bit baggy, with the repetition of the preordained behaviour beginning to grate.

Then all comes to blow with a riotous ending, that, without ruining the surprise, will explode beyond the stage...