Aesthetically powerful, and with a good momentum, Chronicles of Kalki deals with some powerful emotions but ultimately gets a little lost. 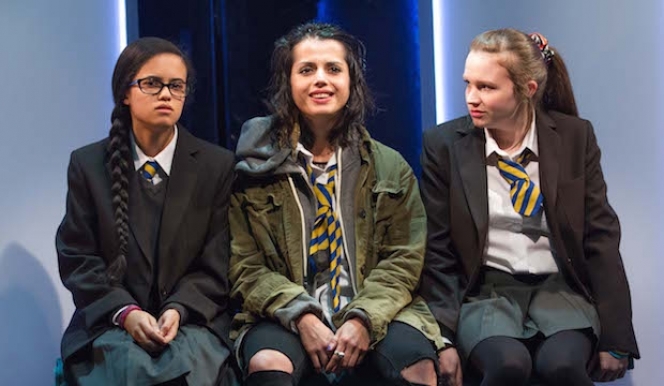 Culture Whisper review: Chronicles of Kalki, The Gate ⭑⭑⭑⭒ ⭒
Chronicles of Kalki is vibrantly acted, and strikes an emotional chord in the troubling rites of passage undergone by these two insecure pubescent teenage girls – yet its message, overall, remains unclear. Told in a series of flashbacks prompted by the interrogations from the eternally sympathetic police officer, Chronicles of Kalki has a punchy momentum and powerful, inventive direction from Alex Brown. It ends, however, on a disappointing note - the picture of anarchism the play builds up leaves audiences reeling in slight discomfort as to what it’s actually trying to say. Kalki’s role is left unexplained – what is clearly an attempt for the presence of this punky teenager cum Vishnu incarnation to remain ‘enigmatic’ seems, by the end, to be a bit of a cop-out. Nonetheless, the characters are well cast, with Angela Terence providing just the right amount of teen 'sass' and contributing to the comic elements in the play. The darker elements afoot are realistic and troubling, addressing such issues as loss of innocence, early sexualisation, and the brutality of peer pressure, with Amrita Acharia playing a powerful, corruptive figure and acts as an analogue for the emotional journey undergone by these young girls, yet the play fails, on the whole, to pack quite enough of a punch.