NEWS: As the design event of 2018 -Garden Bridge- gets the green light from London councils, we tell you why the Joanna Lumley endorsed construsction is fabulous, but flawed 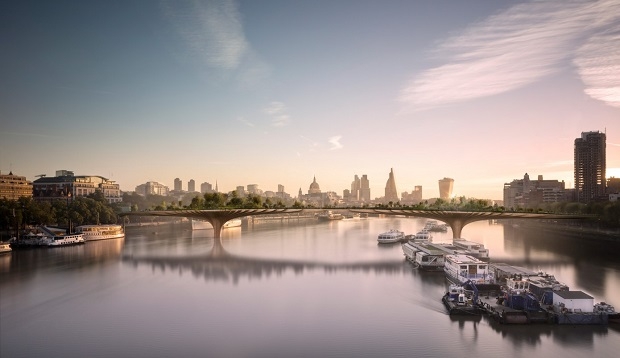 Heatherwick Studio, Garden Bridge London
Last time London welcomed a new bridge, it was the Millennium. And it wobbled. Now Joanna Lumley’s Garden Bridge looks set to become a reality by 2018 as Westminster and Lambeth councils give the big go-ahead.

The enormous project, conceived by the creator of the London Olympic Cauldron and new route master bus, Thomas Heatherwick, will connect the bustling Southbank and its array of theatre and arts venues with the quieter Victoria Embankment. The floating forest, sitting on a copper canopy with 270 trees and five planting areas, will be designed by high profile landscape designer, Dan Pearson.

Ab Fab actress and campaigner Joanna Lumley, who first proposed the idea in 1998 as a memorial to Princess Diana, is convinced that the Garden Bridge will be "like a tiara on the head of our fabulous city". Whether the Thames is really all that fabulous is by-the-by, but after Thomas Heatherwick’s fantastic efforts at the London 2012 Olympics, we can’t wait to see what this architectural wizard comes up with next. Lumley coos that the new park will be "for dreamers a quiet place to linger amongst trees and grasses’ and ‘for tourists an unforgettable landmark".

London’s foppish mayor, Boris Johnson, is also thrilled with the idea of a green structure at the heart of the capital. So much so that other plans like the pedestrian bridge at Nine Elms, Battersea and developments on Victoria Embankment have fallen by the wayside.

But, the real question is whether London needs a new bridge? And if Lumley is convinced of London's growing appetite for architectural projects – why can’t the gluttony spread to other parts of the capital? The East End might be blossoming, but shockingly there are no bridges east of Tower Bridge before the distant Dartford crossing.

Of course back in 2003 we were having the same argument about the Gherkin and then the Shard in 2012. After tremendous expense and typical English suspicion, these buildings are now established landmarks on the London skyline that attract a huge number of tourists each year. So what’s to stop the Garden Bridge, London doing the same?

The road towards council approval has been far from plain sailing. You might remember the hubbub surrounding Lambeth council’s agreement last month when some pretty spectacular conditions were agreed to like shutting the bridge for 6 hours a day, and the need for groups of more than 8 to register. So if you have more than 8 friends think again before trying to cross…

Campaign group, Thames Central Open Space have raised particular concern for the central location of the bridge to which Heathwick grumbles, "If you put this over Battersea, you don't see the heart of our incredible city." There’s also the issue of money. At £175 million, the 367 metre bridge will be paid for largely by The Garden Bridge Trust and a £30 million pledge from the government.

London’s answer to New York’s High Line public park on Manhattan’s disused railway won’t be the fastest bridge to cross, but will certainly be magnificent. Or as Joanna Lumley puts it, "a place to get hearts racing and calm troubled minds". Now, now Patsy…