Kate Bush back on stage for first time in 35 years 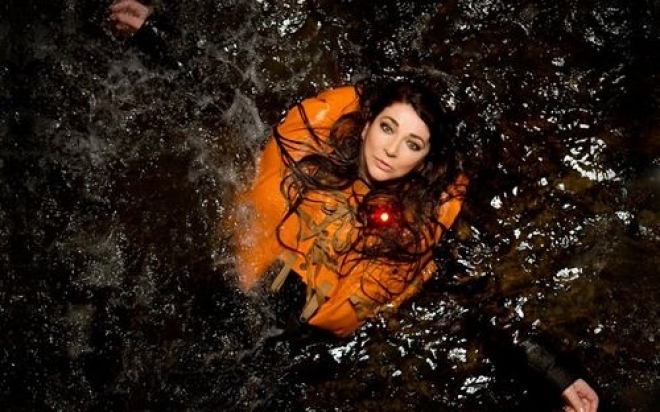 Critics are calling it 'the cultural event of the year' – so it's just as well that last night a rapturous audience response greeted Kate Bush’s first live performance in 35 years.  Read on for the setlist, plus the best of the critical reviews of last night, while below, James Stansfield tells the story of the lead up to Bush's remarkable return to the spotlight...

Top of the City

Running Up That Hill (A Deal with God)

King of the Mountain

And Dream of Sheep

Watching You Without Me

A Sky of Honey:

WHAT THE CRITICS SAID

Alex Petridis in the Guardian:

'Over the course of nearly three hours, Kate Bush's first gig for 35 years variously features dancers in lifejackets attacking the stage with axes and chainsaws; a giant machine that hovers above the auditorium, belching out dry ice and shining spotlights on the audience; giant paper aeroplanes; a surprisingly lengthy rumination on sausages, vast billowing sheets manipulated to represent waves, Bush's 16-year-old son Bertie - clad as a 19th-century artist – telling a wooden mannequin to "piss off" and the singer herself being borne through the audience by dancers clad in costumes based on fish skeletons [...] Her voice too is in remarkable condition: she's note-perfect throughout.

Backed by a band of musicians capable of navigating the endless twists and turns of her songwriting – from funk to folk to pastoral prog rock - the performances of Running Up That Hill and King of the Mountain sound almost identical to their recorded versions - but letting rip during a version of Top of the City, she sounds flatly incredible.'

Bernadette McNulty in the Telegraph

'...there was something thrilling about seeing the often bonkers but still delightful imagination of Bush run free after all this time, apparently untouched by the frenetic pace of the digital world. Perhaps that is why she had asked everyone to turn off their phones, so you could experience the world as quietly and still childishly wondrous as Bush does.'

Andy Gill in the Independent

'Accompanied by music ranging from polyphonic choral harmonies to folksy minstrels,  it’s quite stunning, undoubtedly the most ambitious, and genuinely moving, piece of theatrical pop ever seen on a British stage. Which is just what everyone here tonight was hoping for.'

Indy critic Andy Gill provoked a Twitter storm with his remark 'However beneficial any yoga regime she might follow, it’s simply unbecoming for a woman of a certain age to be prancing about, and certainly not in the leotard and leg-warmers of the 1979 shows', a view which every woman 'of a certain age', whatever that age is, would most heartily disagree...

THE MOST ANTICIPATED COMEBACK SHOW IN POP HISTORY?

The rumour mill has gone into overdrive over Kate Bush’s comeback series. Press shots have been released of her elegantly adrift in a bright orange life-jacket, and forums are abuzz with stories about flotation tanks, professional diving training and even helicopters. It looks like this show’s going to have a deep-sea rescue at its heart.

It fits that this spectacle will take place at the Apollo, the venue where she abruptly concluded her six-week  Tour of Life , as it became known, 35 years ago. The show was a lavish affair; there were 13 performers, 17 costume changes and 24 songs. Her 1979 tour was ground-breaking: she sang while being tossed about by male dancers (a real innovation at the time) and acted out sketch after sketch with clowns and illusionists on an elaborate set, singing all the while. She performed from a giant, animatronic satin egg, designed to represent the womb. It was a technical marvel, a true extravaganza and a damned hard act to follow.

It was assumed, in fact, that it would not be followed. A self-confessed recluse, Bush famously suffers from stage fright, hates interviews and has only given one public appearance since the release of 2005’s Aerial.

So when Bush revealed in March that she is putting on a series of late-summer concerts, it came as something of a surprise, to put it mildly. With no advance warning, she announced a 22-night residency at the Hammersmith Apollo. Tickets went on sale on March 28 and sold-out in 15 minutes (all 100, 000 of them). Keep your eyes peeled for more dates on Kate's website, as it's likely more will be announced.

Bush is best known for the lush epics she wrote in the ‘70s and ‘80s - like Running Up That Hill and the song that launched her career, the warbling Wuthering Heights. Since then, her music has downsized. Now it is often spare and restrained. Her focus has narrowed: in Aerial she wrote about her love for her son, the digits in pi, and laundry. 50 Words for Snow (2011) was an album dedicated to the white stuff.

Her comeback show, however, promises to be anything but restrained; as her late-eighties song put it, This Woman’s Work isn’t over.