In strange times we turn to political documentaries. 2016's problems only start with Brexit... 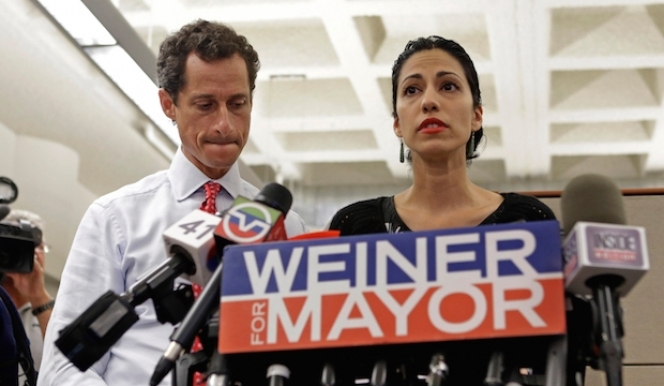 Scene from the documentary Weiner
It creeps up on you during quiet moments. When you're brushing your teeth. When there are no newspapers in your Tube carriage. When your Pokémon Go has frozen. The small, nagging question that won't leave you alone.

Has the world gone completely insane?

OR your can take a deep breath and politicise yourself with some slightly less frivolous (but still entertaining) films. Below are the most recent documentaries, ranked, with the best left 'til last.

5. WHERE TO INVADE NEXT

TRY CULTURE WHISPER
Receive free tickets & insider tips to unlock the best of London — direct to your inbox
When Where to Invade Next came out at the beginning of June, our reception might have been slightly complacent. Sure, Michael Moore, we thought. You go ahead and tell the USA about Europe's best social policies. We know all about them, being PART OF EUROPE. You're preaching to the choir.

Then the EUpocalypse happened. Nigel Farage addressed the European Parliament with all the petulance of a once-bullied child who's grown up to be a traffic warden. Boris 'I can hardly condemn UKIP' Johnson became Foreign Secretary. God knows what else will happen. Perhaps the UK will sink into the sea, like Atlantis, just to be slightly further from Brussels.

Moore's documentary trades in his traditional rabble-rousing and door-stopping for a well-intentioned look at what other countries are doing right. It's light-hearted and hopeful, if a little simplistic, and definitely worth a watch. Unless you think all that footage of Europe will prove too poignant.

4. THE KILLING$ OF TONY BLAIR

Courtesy of The Guardian

It's just been announced that the 6000-page Chilcot report is going to be read aloud, in its entirety, at the Edinburgh Festival. As a quicker alternative, you could read the complete works of Shakespeare three times over. Or you could watch The Killing$ of Tony Blair.

The documentary, presented by George Galloway, is certainly punchy. Galloway is an urgent, pugnacious presence, and he's not here to waste any of his Kickstarter-funded 90 minutes exploring nuances or ambiguities. No, he's here to provide Tony Blair puns. Blair's avaricious manoeuvring is part of 'the Blair Rich Project'. Blair's private jet is known as 'Blair Force One'. It threatens to become addictive. Who Blairs Wins. On a Wing and a Blair. Are You Going to Scarborough Blair?

If you can ignore how the brim of Galloway's fedora is always edging onscreen like the fin of a small angry shark, then you're left with a compilation of evidence that is rarely less than damning. And it's particularly bittersweet to see how rapturously Blair's appointment to PM was received; it's hard to imagine a similar enthusiasm for any British leader these days. Thanks for making us so cynical, Tony.

The subject of Almost Holy is as lip-smackingly pulpy as its title: Pastor ‘Crocodile’ Gennadiy Mokhnenko is a vigilante priest, a defender of the righteous, a man of God doing whatever it takes to protect his flock.

Don't expect any nuns with guns: if the premise sounds fantastical, the film itself deals with the grimly, gruesomely real. Mokhnenko cruises the ruined streets of Mariupol, Ukraine, looking for heroin-addicted children to wrestle into his van and rehabilitate. The deprivation, not to mention Mokhnenko's heroism, would be almost unbelievable if Steve Hoover were a lesser director.

One of Mokhnenko's hopes – for his country, for his children – is that Ukraine will successfully join the EU. Draw your own conclusions.

It may or may not comfort you to recall that 2011 was also a chaotic year. As well as the Arab Spring, the Japan tsunami, and the multiple deaths of famous figures – almost as many as 2016 – there were the London Riots (which happened all over the country, but we're oddly possessive).

The Hard Stop is an intimate and sympathetic look at the community of Mark Duggan, whose killing provided the crucial sparks for the later blazes. Beyond its value as the post-mortem of a specific event and its fallout, it's also a long hard look at the mistrust and hair-trigger paranoia that corrupts the relationship between police and black communities – something worth considering in the age of Black Lives Matter.

Weiner isn't a 'political' documentary, per se. There's no agenda, no activism, no campaign to persuade you to join. It's not noticeably left- or right-wing. It's not hard-hitting or tear-jerking. It's just a portrait of a man and the story of his mistakes.

So why does it take the number one place on our list? Well, the man in question happens to be a politician, and his mistakes happen to be political. When former congressional aide Anthony Weiner ran for mayor of New York in 2013, he knew he'd be dealing with a reputation tarnished by an eye-popping sexting scandal, so he let a former employee direct an access-all-areas film about his mayoral campaign. Presumably he wanted to show everyone the real Anthony Wiener.

He does. More than could have possibly been intended. And in doing so, Weiner reveals something about all politicians. Talented and well-intentioned, he's also a mendacious prat. Other political documentaries will lose relevance with time; Wiener will endure as a side-splittingly funny exposé of the governmental mindset, and as a way of educating future generations about the flaws of their leaders. It's a film about a man exposing himself, but it should be shown in schools.