Kesting enters through an upstage door, allowing white light and billowing smoke to pour into an otherwise greyed-out room. Jan Versweyveld’s desolate set blends together a sparse, incomplete living space with an oppressive factory floor: a cathode-ray television, a sheetless, single bed, industrial fans toward the ceiling and punch marks in the concrete walls. 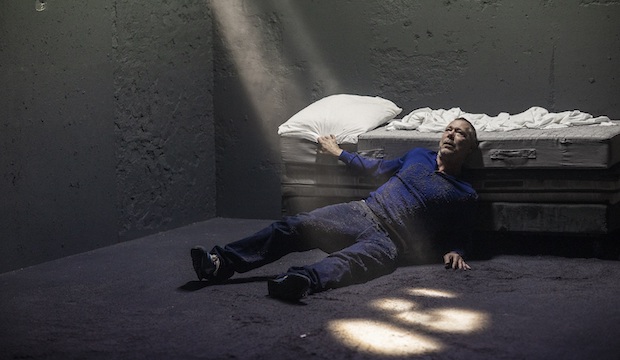 Hans Kesting in Who Killed My Father. Photo: Jan Versweyveld

Kesting begins as the father, hands bunched in his cerulean jumper, aspirating and mumbling inarticulately. ‘I don’t recognise you’, he says as he changes posture to become Louis himself. It’s a sombre start and contrasts with the pre-show pop music. Kesting transforms character with such ease and commitment it’s no surprise he was nominated for the prestigious Dutch acting award, a Louis d’Or, for this performance. As Louis, he speaks directly to his father and recounts memories non-chronologically as if inhaling them like smoke: his mother smelling his father’s cologne, his father’s rages fuelled by pastis, the Christmases where they would have foie gras to prove they weren’t poor.

Some flickerings are more convincingly written than others, and the pacing sometimes feels stilted by the passive storytelling. Strange too are the odd changes in address where Kesting’s Louis suddenly speaks to an unspecified audience. Van Hove’s strength is in directing, and the speechless, profound moments of recess illuminate as much as the stories they interrupt: Kesting, now Louis’s father, stands at the door, furiously smoking and fighting a hacking cough. 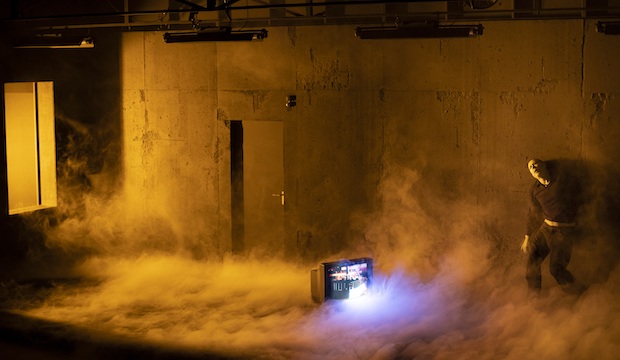 Hans Kesting in Who Killed My Father. Photo: Jan Versweyveld

The most evocative moments come when underscored with pop music of the era that blasts through the suffocating masculine silences. A refreshing shift occurs when Kesting recounts a living room performance of Aqua wherein Louis plays the lead singer: a disco ball flies from the ceiling and ‘Barbie Girl’ starts playing. In another touching sequence, Kesting’s Louis laments his father’s refusal to buy him a copy of the movie Titanic for his birthday. Then, with Celine Dion singing ‘My Heart Will Go On’ and the film playing on the TV, Louis opens his present to find the collector’s edition of the movie. But such love is often paired with cruelty, and sitting next to that memory is another: Louis comes home to find his father has given away his favourite board game to another kid for no apparent reason. ‘C’est la vie’, his father sneers.

What begins as an examination of his father’s life turns into an investigation into his death. Kesting questions where the blame lies: the factory that broke his back, his family, himself? He turns and fixes his gaze on the ruling class, for whom ‘politics is an aesthetics’ with no real-life consequences. The monologue morphs into a polemic, decrying Chirac, Sarkozy, and Macron for the legislative changes they made that entrapped his father, his family, and the rest of his village. It’s a very sharp turn that feels oddly untethered; while it acts as the most persuasive part of the piece, it could have been interlaced earlier to feel fully grounded.

Still, Who Killed My Father is a bitter and affecting look at the relationship between father and son, masculinity and homophobia, the working class and the ruling elite. But most importantly, it acknowledges the ways in which we must develop coalitions in order to enact change. The father speaks for the first time at the end of the play, and, for the first time, is in political agreement with his son: ‘We need a revolution’.