Based on BBC Radio 4’s Book of the Week, this stage adaptation of The Boy with Two Hearts details the heartrending struggle of Afghan refugees

The Boy With Two Hearts, National Theatre review 3 The Boy With Two Hearts, National Theatre review Holly CW
The true story begins in Herat, Afghanistan, in the year 2000, with Fariba Amiri (Houda Echouafni), a mother of three young boys, brave enough to take on the Taliban and speak out for women’s rights. This inevitably does not go down well, and the Amiri family have to flee for their lives. Fortunately, they always intended on moving to the UK so their eldest son Hussein (Ahmad Sakhi) can get treatment for his severe heart condition tachycardia. Unfortunately, they have to trek through Russia, Ukraine, Turkey, Austria, Germany, Holland and France to get to their final destination. They are robbed on multiple occasions, cheated by handlers, and never know if they are going to escape the various refugee camps they find themselves in.

It sounds distressing, and it is, but the production never leans into the despair of it all; instead keeps a firm hold of the endless love the Amiri family have for each other, and their unbreakable hope that they will achieve their goal. The original book was written by Hamed and Hessam Amiri, the two surviving brothers, who have ‘never written a book before… never read a book either’. Their intention is to tell their family’s story of survival, and ensure the legacy of their brother Hussein lives on. The stage version adapted by playwright Phil Porter and directed by Amit Sharma does just that: it is a heartfelt and empathetic portrayal of their lives, but the show never dazzles. There are moments where tears are meant to flow, but somehow they don’t. There are jokes peppered throughout the script, but somehow they fall flat. The first half is more engaging as the characters experience the dramatic action in real time, whereas the second half places too much emphasis on characters narrating the story to rush through events. 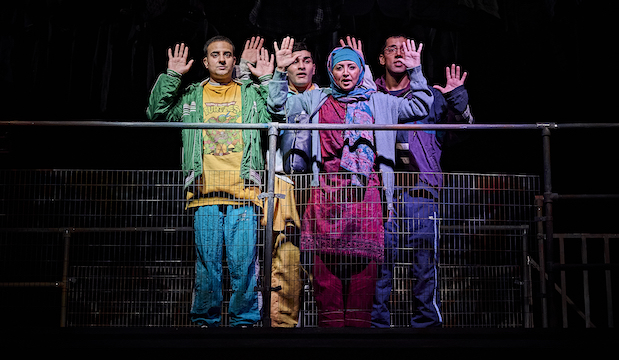 Afghan music haunts the piece, sung by co-composer Elaha Soroor, who follows the family like a guardian angel. The use of creative captioning and animation is effective - the script projected is onto the stage - with words creating the shapes of planes, trains and automobiles. It is additionally helpful for the Farsi and Arabic that merges with the English script. Set design from Hayley Grindle utilises hundreds of T-shirts and coats that hang from the rafters, giving the impression of thousands of families who have made the same monumental decision to immigrate and seek out a better life, yet many are frozen in refugee camps as a result.

The National Theatre’s press night fell on the same day that Home Secretary Suella Braverman announced her plans to stop people claiming asylum when entering the UK through irregular routes. This is exactly how the Amiri family arrived in the UK. The United Nations refugee agency has reported that Braverman’s plan could be in breach of the refugee convention. This is why it is so important that the NT is showcasing this work: it brings to life the plight of refugees. It gives them a face and a story. It offers them humanity. Braverman and the rest of the cabinet could do with a visit to the theatre right now.