A second chance to catch Emma Rice's Romantics Anonymous comes this autumn, as the play is broadcast live from Bristol Old Vic

As you enter the intimate, candlelit Sam Wanamaker Playhouse you are given a chocolate. It is, you are soon told, a magic chocolate.

It is fitting introduction to a show that only gets sweeter and more enchanting.

New musical Romantics Anonymous is Emma Rice's last hurrah as artistic director of The Globe. Her gift for sparky story-telling and zesty humour come together to delicious effect in this chocolate-themed love story with a kooky shell and a gorgeous, gooey centre. Rice adapts French-Belgian film Les Émotifs Anonymes and the jaunty music and lyrics come from Christopher Dimond and Michael Kooman.

The story’s French roots are rendered with Amelie-esque charm and an ensemble cast in Breton stripes and berets. The delightfully low-fi production uses neon lights, colourful costumes and spot-on physical theatre to transport us through Paris and Lyon on an unconventional love-story. From man-spreading businessmen with elaborate moustaches to the haughty head tilt of a Parisian maître d'hotel, the details are delightful. 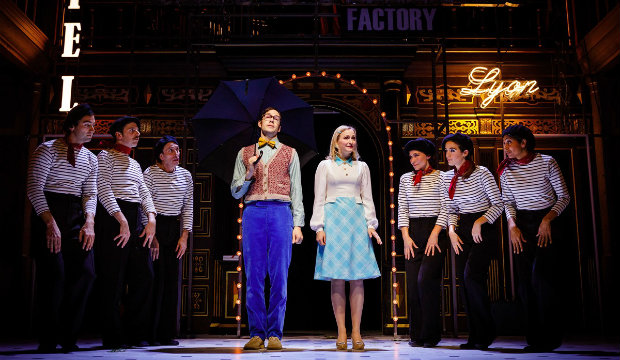 We follow painfully shy Angélique, played with plenty of pained looks and prim elegance by Carly Bawden. She is a master chocolatier, but she hides her talent for fear of attention. Then she meets risk-averse Jean-René (an irresistibly bumbling Dominic Marsh). He owns an ailing chocolate factory and cowers beneath the family motto of ‘best to hope nothing happens’.

Together, ils sont émotifs. They are sensitive, awkward and, as we learn in a particularly sparkling musical number, ‘an ungainly pair with no savoir-faire’.

As their reservations gradually melt away the story arc is sweeter than one of Angélique’s chocolates, but it’s the swirl of humour and eccentricity that makes Romantics Anonymous so delicious.

Good quality theatre is pleasingly plentiful, but it’s rare to find a show that leaves you feeling so damn cheerful. An original, smart romantic comedy is rarer still. So savour this show like you would an artisan chocolate.