Julius Caesar, Shakespeare's Globe review 2 Julius Caesar, Shakespeare's Globe review Holly CW
It is difficult to understand why director Diane Page injects so much comedy into a play brimming with blood, subterfuge, and literal backstabbing. The resulting topsy-turvydom means her production has an uneven tone sapping it of any of potential political poignancy.

Littered with nebulous creative choices, there is nothing concrete about the world portrayed on stage. The simple set, consisting of a marble statue of Caesar standing on a tyrian purple carpet, evokes the grandeur and splendour of Ancient Rome. Yet costume supervisor Sian Harris seems to have been inspired by Nouvelle Vague films of the 1960s and dresses the Roman senators in grey turtlenecks and white suits.

But the production’s insistence on peppering scenes with humour does more to befuddle its audience than the costume design. Instead of alleviating tension, the humour prevents the production from creating any in the first place. 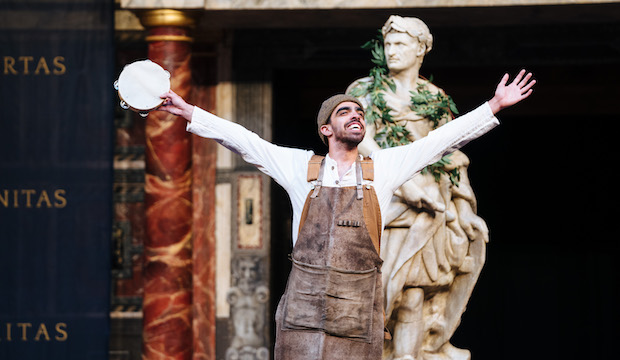 Caesar’s lavish death is particularly jarring. More a massacre than an assassination, the whole sequence is elongated to the point of being laughable. Blood spatters over the stage cartoonishly (and onto one unfortunate audience member) with each feverish stab. But Caesar keeps getting up for more like an undead zombie fighting until the last breath. It makes Quentin Tarantino look tame whilst also being funny in its savage extravagance.

The uneven tone precludes the possibility of highlighting any kind of social commentary. The production swaps the genders of Cassius and Brutus and seems to want to comment on the role of women in politics. An on-stage stand-off between the male Octavius and Mark Anthony, and the female Brutus and Cassius, all of whom are now cloaked in military regalia, is the only distinct moment that captures this concept. But there is not much beyond this image, and if there is it is too cloaked by laughter to be meaningful. 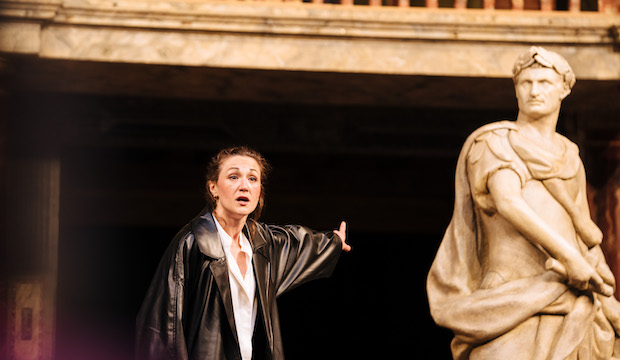 Anna Crichlow’s Brutus takes time to find her feet, at first unable to find a solid grasp on the language’s rhythm. But as Brutus morphs from conspirator to military strategist in the second act, Crichlow solidifies her presence on stage, and she commands the language in turn. Charlotte Bate’s sprightly Cassius on the other hand has a stronger grasp of the meter throughout and brings a vibrancy to Cassius that keeps the production from becoming swampy.

Samuel Oatley’s Mark Anthony is infectiously charismatic, but in playing to the audience-cum-Roman public's sense of humour over their sense of justice, Mark Anthony has no gravitas as a noble soldier on the quest for revenge. The memorable 'friends, Romans, countrymen' speech is dripping in sarcasm, not subtly, making it difficult to believe that he could sanctify Caesar in the eyes of the mob and rally them against the conspirators.

In Page's take on Julius Caesar, all roads lead to a groan.