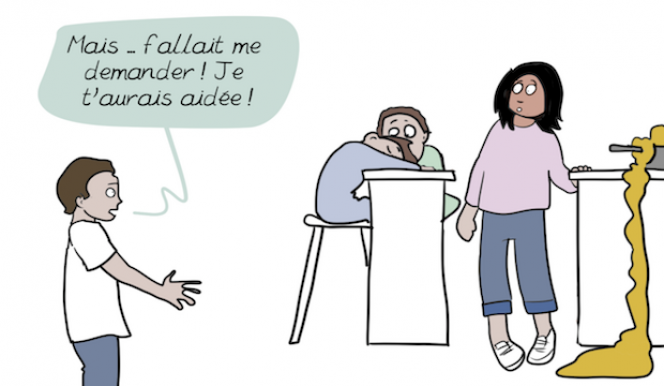 Emma, webcomic. Artist unknown
Emma is a web comic, heartbreaking in its simplicity, created by an anonymous illustrator. The French artist boasts more than 150,000 followers on Facebook and went viral after her pithy cartoon series Fallait demander received massive online acclaim. Although her works are in French, you don't need more than a basic understanding of the language to grasp the straightforward, powerful message.

Emma questions the distribution of emotional labour that is still sadly prominent in most households. Many of the strips are based on first-hand anecdotes, showing the harm that can occur from everyday interactions when we're unaware of the paradigms we view those closest to us through. 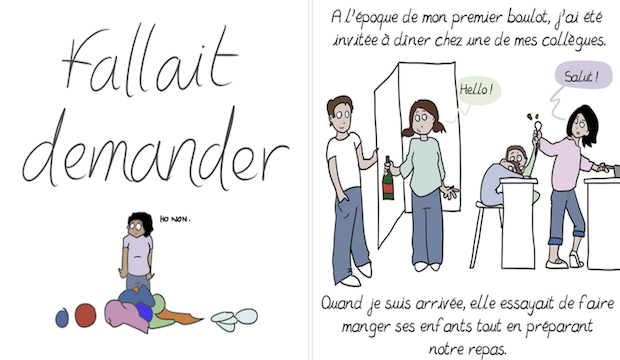 Emma: Fallait demander. Web comic.
Translation: On the first day of my new job, I was invited to a dinner at a colleague's home. When I arrived, she was trying to feed her kids whilst preparing our meal.

One particularly striking strip sees a cartoon character being chastised for ruining dinner. 'I would have helped if you'd asked,' her husband says. The implication here, of course, is that women are expected to perform these tasks whereas men need to be invited (and only in cases of emergency).

TRY CULTURE WHISPER
Receive free tickets & insider tips to unlock the best of London — direct to your inbox
Female proficiency in household matters is often attributed to genetic nest-making. This perceived correlation between gender, affability, and domesticity is symptomatic in the professional sphere as well, where women are often seen to 'naturally' deliver quality service – think air hostesses, telephone operators, waitresses, anyone whose job description necessitates a smile to a degree. 'The subject may seem trivial because it's about collecting linen, but it's really exhausting, and it's political,' the artist told BuzzFeed News. 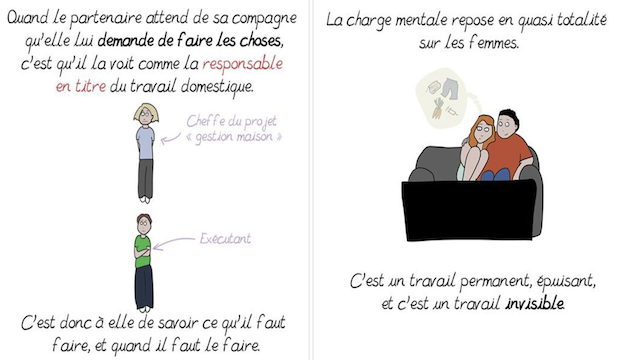 Emma: Fallait demander. Web comic.
Translation: When you ask your significant other to ask you to do things, it's because you see them as totally responsible for domestic tasks. 'Chief of project "household management"', 'Executant'. Therefore, it is up to her to decide what to do and when to do it.
Emotional labour rests almost entirely on women. It is permanent, exhausting and invisible work.

The perils of this perceived 'natural' ability to deliver consistent quality service, one which women are deemed to be capable of by virtue of their sexual difference from men, has harmful effects on individuals on a personal level. Although antiquated stereotypes on household tasks have been mostly abolished, the lack of dialogue about expectations reinforces harmful assumptions.

Scroll through her albums for some bite-sized, charged feminism. Some of our favourites include Petit Pony contre Spiderman, Fallait demander, and Les vacances. Emma's Horatian overtones will make you say "SO TRUE" as they transcend cultural and linguistic boundaries to speak to women around the world.