Robert Louis Stevenson’s tale has sparked countless interpretations in every art form because it contains an idea that still speaks so strongly: that we are composed of many selves, that one can have a “better nature” or a “split personality”, and that somewhere in this knowledge is the key to absolution.

While we mere mortals must reconcile the uncomfortable parts of ourselves, Jekyll creates an elixir that has the power to simplify and streamline him into two discrete selves: ego and id; rational and instinctive; good and bad, and, in this version, timid, loveable weed versus murderous lothario.

The score, by Grant Olding, who also composed One Man Two Guvnors (National Theatre, 2011), skips through time and genre to suit the action, with two main motifs – an upbeat 1930s jazz for Jekyll and a more bluesy, raw feel for Hyde.

This is a production of two halves, the first a little staid, but the second offering a whole new level of inventiveness and daring.

Played by two actors, Jekyll (Daniel Collins) and Hyde (Tim Hodges) switch places on stage through an interlocking, electric tangle of limbs. Through strobe lighting it looks as though they are one body struggling to become two and yet hopelessly snapping back together from some elastic force. 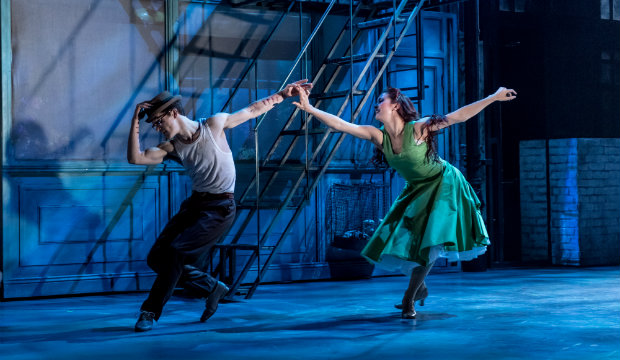 There is a powerfully adventurous moment of choreography when the bodies of Jekyll’s victims slip in through his window to haunt him. Their inhumanly spasmodic movement and naked skin makes them seem like abject lumps of flesh, severed from their souls.

Ebony Molina, who plays Hyde’s promiscuous love interest and is also the associate choreographer, stands out as the best dancer, charged with a kind of maniac intensity that threatens to steal the show.

For anyone sceptical of a dance drama without words to aid narrative understanding, don’t be: McOnie proves that the language of dance can be just as illustrative as a script and far more artistically expressive.

Depictions of sexual violence and rape. Suitable for ages 16+