A daring synthesis of the real and the virtual, choreographer Tom Dale’s dance installation I INFINITE dazzles at The Place

So, divested of coats, shoes and bags, issued with light grey overalls and provided with a lengthy set of instructions by the choreographer Tom Dale, we are led into the twilit cube where it all happens, and given permission to move around to find better viewing angles.

Inside everything is devoid of colour; instead, all around are Barret Hodgson’s monochrome projections of constantly shifting cubes and squares, in a rather mesmerising perpetual – infinite, even – movement. A digital grid made up of equal squares occupies the centre of the floor. Slowly, a single dancer, Jemima Brown, enters that space.

Brown is a wonderful dancer. A neat figure with her cropped hair and white costume, she moves with controlled plasticity, always earth-bound, making profuse use of deep pliés, her arms by turns extending to encompass the space around her, or contracting as if to shield her body.

As digital media impinges more and more in our world, the choreographer Tom Dale is particularly interested in the three-ways dialogue between dance, the digital arts and electronic music; in his own words, he is inspired by ‘how the digital world is moving on an increasingly fast trajectory towards lifelike manifestations.’

So, I INFINITE presents us with a figure that, in Dale’s own words is ‘a study of the science and artistry of human movement from a post-human perspective;’ this would explain the requirement that the dancer’s face be totally expressionless, her movements occasionally acquiring a robotic quality.

The second part of the show is very special. As the dancer withdraws, the room is filled with haze; and as it is captured by the spotlights resting on the ground in the corners of the room, physical planes establish themselves. The dancer returns and slowly lets herself become submerged by one such plane. It appears like the uncommonly still surface of a lake; certainly, the work’s electronic soundscape (a collage of pieces by four composers) now acquires the gentle fuzziness of underwater sound.

Bits of her slowly emerge, a long leg now, then a head, only to disappear again. It is a truly magical and sublime sequence and a fitting end to a work that stays with you long after its 50 minutes are over.

Tom Dale, Artistic Director of the Tom Dale Company, has his stated that it is his mission to change the way audiences feel about seeing performances, and to challenge the perception of contemporary dance. On this showing, we’d say he is succeeding. 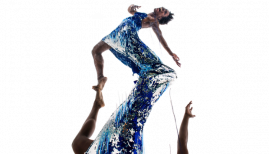 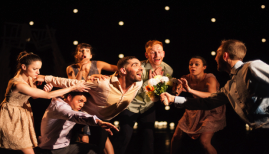