Get the Best of London Life, Culture and Style
By entering my email I agree to the CultureWhisper Privacy Policy (we won`t share data & you can unsubscribe anytime).
Immersive

Dopamine Land is the latest pre-filtered, Instagram-packaged ‘immersive experience’ to arrive in London, but is it style over substance?

Dopamine Land was pitched as a ‘total disconnect from reality’, one that would transport punters into a ‘world of happiness’ while encouraging them to ‘connect with their emotions’ and ‘channel the limitless imagination of their childhood’. It's an experience skewed to a young, social media-savvy audience, and it certainly looks the part – if you’re looking through an Instagram filter or snappy TikTok story, that is. In reality, Dopamine Land is a schmaltzy, surface-level affront to the senses, with a core purpose of driving visitors to pose for – and, crucially, share – photos of themselves surrounded by colourful backdrops and retro props.

A tunnel of neon-beam door frames lures expectant visitors into the show. Unlike your typical immersive escapade – such as Punchdrunk’s The Burnt City, the ongoing Cabaret revival and even Secret Cinema’s questionable take on Bridgerton – which require phones to be switched off and sealed away so as to avoid spoiling the experience for others, here, a steward encourages visitors to use their phones to document their time at Dopamine Land. 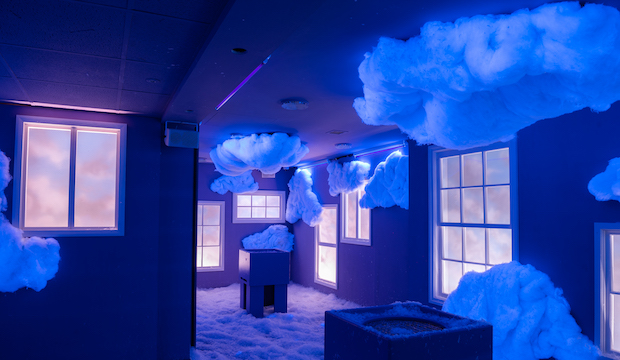 Armed with a programme, you’ll be informed which rooms are better for pictures or videos – a further reminder your role here is primarily to capture content. One chamber even has camera and video icons on the floor to show you where to stand to get the best footage. Of course, the more pictures posted, the more visitors will come to Dopamine Land. The cynics among us might say it's a bit like asking your paying customers to do your marketing for you.

Batched into a small group of visitors, we’re dumped into a series of rooms for a quick photo opportunity before being shepherded to the next one to do the same. Each room spoon-feeds our senses with its in-your-face colours, patterns and, in some cases, scents. Visually, most look better on our phone screens when we scroll through them later than they did in person. This is digital-first immersion, after all. 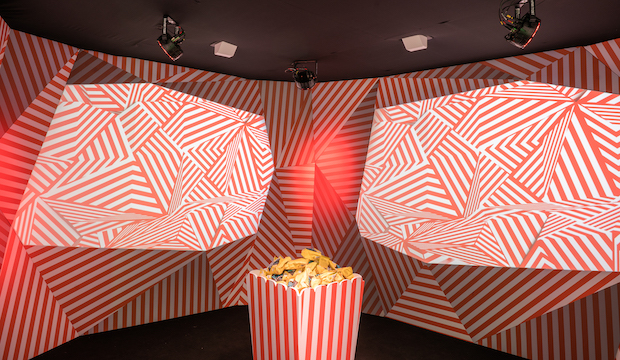 A popcorn room, scented like the sweet-or-salty cinema treat, is a chance to eat a bag of the stuff while watching animated footage of popping kernels pouring out of boxes. Despite being unbranded, it looks like an advert and, given the tone of the experience, it’s surprising a deal wasn’t struck up with the likes of Joe & Seph’s to take ownership of the installation and push their produce.

A room labelled ‘Smile!’ promises to create the vision you’re ‘living out a summer sun soaked paradise’, whatever that means. Yellow, the colour associated with dopamine, is fittingly dominant in here, but staring at the strange, stock images of dusty library books and eerie mushrooms plastered on the walls amid the sunflowers and mountain peaks, you'll sooner sob than smile. How have they got this so wrong?

Another, ‘Lucid Dreams’, promises an ‘infinite dreamscape’ where your imagination could ‘fly free’, but how its giant screens with twirling shapes reminiscent of Microsoft screensavers could be linked to anything remotely dreamlike is unclear. (A side note, but a new immersive experience opening in Woolwich, Dreamachine, sounds far more enchanting and authentically psychedelic.) 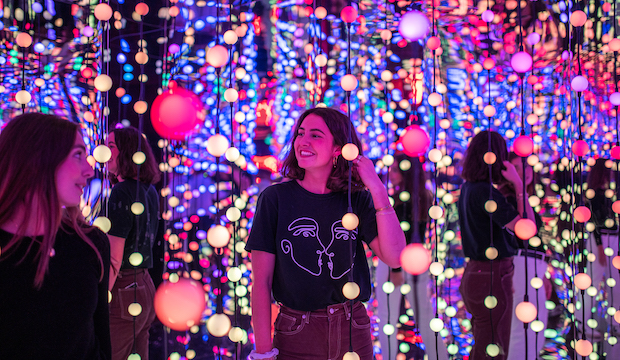 Did Dopamine Land inject us with a dopamine hit? No. Rather, it left us feeling disengaged and deflated at the thought that, in an age of mindless scrolling and instant gratification, this depthless series of lazily-executed, photo-ready installations could be passed off as artistic expression.

To be fair, it probably does look great on the ‘gram. If you’re in the market for a new profile picture, then by all means go and snap yourself surrounded by Dopamine Land’s playful props and twinkling lights. Tickets to Kusama’s Infinity Mirror Rooms are sold out anyway.