TRY CULTURE WHISPER
Receive free tickets & insider tips to unlock the best of London — direct to your inbox
A hugely ambitious project, it’s brought us theatre, dance, exhibitions and talks by a number of Chinese artists, writers and thinkers. And now, after three packed annual editions, the Festival is reaching its end with a fascinating programme spread over four days in October.

The programme is so packed, it would impossible to list every event; you can find a full listing here.

However, some events are definitely worth highlighting, first and foremost Cloud Show – a complex multi-disciplinary project by the BAFTA and Academy Award winner Tim Yip, designer of the sumptuous film Crouching Tiger, Hidden Dragon.

Cloud Show includes an art installation, a video presentation and a series or workshops. It culminates on festival closing day (7 Oct) with a catwalk display of 30 new spectacular costumes, the result of a long collaboration between some of London’s best fashion designers and promising London fashion students.

Also enticing is the one-woman show The Empress, the true story of Princess Der Ling, who found herself caught between relative freedom in Europe and the stifling culture of Beijing’s Forbidden City.

A series of talks will deal with topics such as the rise of feminism in China; there will be comedy and a carefully curated programme for families.

A dance piece by the Beijing-based choreographer Wen Hui, called RED, is the subject of a separate preview in Culture Whisper’s Dance section. 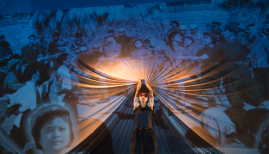