Veteran dance figure Siobhan Davies brings her most ambitious work to date to the Barbican. “Dance,” however, is a misnomer

It bills itself as "a major new work by Siobhan Davies Dance." It’s certainly big in scope and ambition. Under the unwieldy title material / rearranged / to / be this interdisciplinary installation sprawls over the open space of The Curve at the Barbican.

Now, if you like your art to be linear, well-defined and pigeonholed, and easy to comprehend, stay away.

If, on the other hand, you like a major challenge in the shape of a series of philosophical inquiries designed to make you puzzle out some kind conclusion from a few givens, then this is for you.

It’s a “performance installation.” You can come in and out of The Curve as you wish, stay as long as you like, and wander from element to element as the performers do things around you. Or not.

Choreographers, visual artists and designers have come together under the aegis of veteran priestess of dance Siobhan Davies to explore our bodies’ abilities to communicate.

When we arrived the elfin figure of Andrea Buckley was moving very slowly in front of two screens, one of which showed anatomic drawings of her body - in this case the bones of her feet - while the other showed live film of her bare feet in motion.

Sound was a distant metronome, or perhaps a grandfather clock ticking away. In front of her, a small brass pendulum hanging low from the ceiling oscillated gently. She uttered a few soft, undistinguishable words.

Then Siobhan Davies, grey bob framing an intent face, her spare, ramrod-straight figure dressed in dark leggings, white polo neck and white sneakers, entered with her performance partner, Helga Kaski. Together, they strode purposefully tracing line patterns on the floor with the help of long pink string and some pink dust. Whether that was part of the performance, or just some last minute scene setting, who knows?

You walk on (trying not to disturb those pink lines, though perhaps it wouldn't matter if you did), and come upon a dance video seemingly running on a loop - that’s Matthias Sperling’s Loop Atlas. 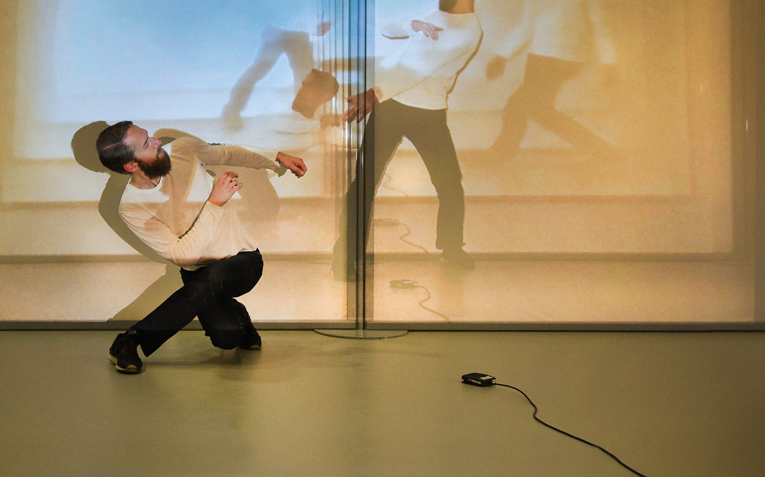 And as you go further into The Curve, various written notices bring to your attention some of the ideas the piece means to explore, for example, Image, Time, Action, Mind and Gesture. Gesture as communication: “Intentional, used expressly to convey meaning.”

All this is inspired by the practices of the art historian Aby Warburg (See Sidebar), and updated by the latest investigations into neuroscience.

Complementing this ambitious installation - or perhaps in an attempt to make its ultimate meaning a little clearer - Barbican Film and Siobhan Davies co-present screenings of films by and about dancers and choreographers once again emphasising the key theme of gesture and movement. A workshop takes place on 24th January; and a discussion on 26th January.