San Francisco Ballet has started a rare residency at Sadler’s Wells with the glorious Shostakovich Trilogy, by the choreographer of the moment Alexei Ratmansky

The expatriate Russian choreographer Alexei Ratmansky, with his deep knowledge of tradition blended with a seemingly endless ability to create something new and fresh is, therefore, a natural fit for San Francisco Ballet.

And, for all of Ratmansky’s ability to handle all sorts of different work, from meticulous reconstructions of 19th century Russian classics to modern day creations, Shostakovich is perhaps the most perfect fit for the sensibility of a man born in 1968 in Communist Russia.

And what depths the choreographer brings to this Shostakovich Trilogy! An essentially abstract work, it nevertheless points the spectator in the direction of so many things: the composer’s endless struggle with the crushing strictures of the Stalinist regime, his nervy, rapid-fire music constantly shifting in tone and tempo, his love of modernity that so irked his political masters.

The programme explodes onto the stage with Symphony #9. 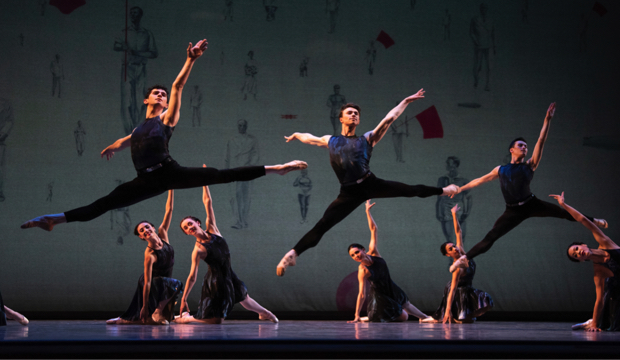 San Francisco Ballet in Ratmansky's Symphony #9 (c) Erik Tomasson
Here, 21 dancers – five soloists and an ensemble – go through intricate variations of pairings and solos, more often than not working in canon in preference to unison, their vigorous jumps and lifts responding to the score’s vertiginous speed. Vibrant and technical as all dancers are, a special mention must be made of Wei Wang, a superb live wire of a dancer, who made light work of his sparkling solos.

A cream-coloured backcloth is discreetly dotted with Soviet symbols: a red flag here, a hammer there; and the final movement acquires a darker tone, as if to remind us of the oppressive context from which this music erupted.

The second piece, Chamber Symphony (pictured up top) has a more elegiac tone and a subtle narrative thread. A man (Ulrik Birkkjaer) captures the attentions of three women (Sasha de Sola, Mathilde Froustey and the truly exceptional Yuan Yuan Tan), in a grouping just so slightly reminiscent of Balanchine’s Apollo with his three muses.

The choreography for their encounters is gentler, the lifts more languorous, poses held a little longer, a sense of yearning mixing with light humour in the man's bemusement at the women's attentions.

There is nothing celestial about this piece, though. The stunning backcloth depicts oversize stern male faces made up of jagged pieces; dark, bass accented sections of the score prompt the ensemble to crowd the man in a deeply disquieting way.

The Piano Concerto #1 closes the programme, the Royal Ballet Sinfonia being joined by the pianist Mungunchimeg Buriad and trumpetist Michael Allen. 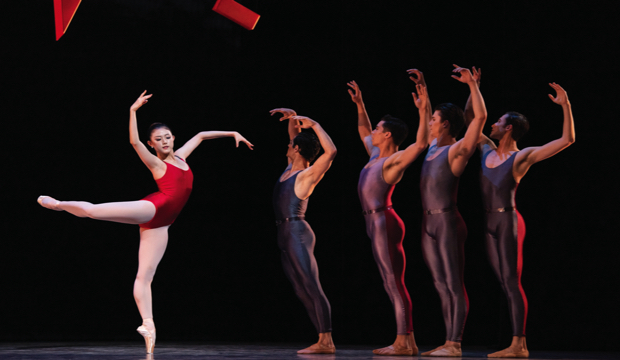 The dancers, two lead couples (Sofiane Sylve, Carlo di Lanno, Wona Park, Angelo Grego) in leotards of bright red and gunmetal grey (costume designer Keso Dekker) joined by six other couples, delight in a jazzy choreography that draws freely from Broadway and is infused with a mix of brash humour and moments of thoughtfulness.

Programme A is a confident, exhilarating display, that whets our appetite for things to come. Details of the remaining three programmes here.