McNicol Ballet Collective debuted at the Bloomsbury Theatre with Awakenings, a programme of works by its artistic director and choreographer Andrew McNicol

The most ambitious of the four pieces performed by his small ensemble of seven freelance dancers was Firebird Reimagined, simultaneously an homage to the composer Igor Stravinsky on the 50th anniversary of his death, and an attempt to create a narrative that speaks to us today.

You’d need a little enlightenment before approaching Firebird Reimagined; but in the short behind-the-scenes film that preceded its performance, dancers and choreographer provided the basics: so, the firebird, which in the original Russian ballet breaks the spell of an evil magician and liberates a bevy of bewitched maidens, including a love interest for the tsarevich, here becomes a symbol of nature that liberates a young man from the tyranny of technology. 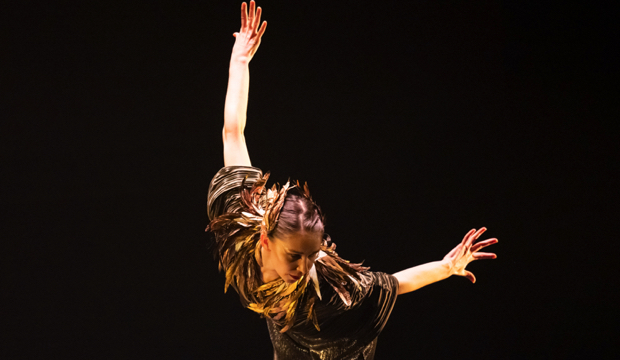 Kisten McGarrity in Firebird Reimagined. Photo: ASH
In a flickering black and copper costume (inspired costume design was by Elin Steele) she materialised before the man, Laurie McSherry-Gray. Her delicate bourrées en pointe conveyed a lightness reinforced by soft arms, that often crossed in front of her chest in a mix of protection and beseeching, but could nevertheless convey enough power to prise the reluctant man away from his technology-obsessed friends, two couples in white suits and – a nice touch – sunglasses.

Also very strong was Of Silence (pictured top), an elegiac piece for six dancers set to music by the Latvian composer Peteris Vasks. Dressed in lead-coloured costumes – long, heavy skirts for the men, long-sleeved tops for the women, the dancers appeared to represent a tribe involved in a religious ritual. Here McNicol’s choreography was beautifully fluid, each movement slowly dissolving into the next one to convey longing, submission, prayer. Andrew Ellis’s tremendously atmospheric lighting (one of the high points of the entire show) subtly tracked and helped define the changing moods of the piece.

In total contrast, there was an injection of vibrant American energy in Bates Beats, a piece for two bare-chested men in leather trousers and three women in flowing short midnight-blue dresses set to a score by Mason Bates. Tall, elegant Shevelle Dynott (formerly of English National Ballet) looked particularly good, his dancing displaying the required combination of attack and classical purity.

The evening opened with In Ecstasy, set to an original, specially commissioned score by Nicholas Thayer and Setareh Nafisi. Its neo-classical choreography, varying formations, pas de deux co-existing with pas de trois with unusual lifts, a variation for three men, a rhythmic sequence for the ensemble, was a clear declaration of intention from a young choreographer with much to offer.

Delayed by the pandemic, McNicol Collective, very much a joint project for choreographer and performers, is finally up and running. More, please!