Maliphant and Fouras – the perfect partnership 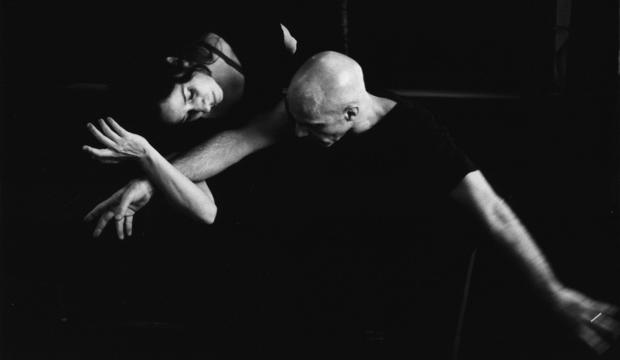 Russell Maliphant and Dana Fouras in rehearsal, photo Nicola Bensley
Russell Maliphant’s cavernous studio in west London is plunged into deep penumbra when I enter mid-rehearsal, and for a brief moment, I think I’m watching a film of a female figure swirling against an entirely black background, her body speckled with shimmering black and white projections.

In reality, it immediately becomes apparent that this is the real live dancer Dana Fouras rehearsing a sequence from The Space Between, a new work by Russell Maliphant, which will premiere at the Coronet Theatre in February, as part of maliphantworks3.

The programme includes live performance as well as film; so, given that initial illusion, I wondered whether Russell Maliphant was trying for a uniform filmic visual across the entire performance.

‘Inadvertently, there’s an aesthetic. When you work with that aesthetic it creates something that might suggest it wasn’t the first….’

‘You didn’t set out with that intention,’ says Dana Fouras.

They speak as they dance: complementing each other, completing each other’s phrases, reading each other’s minds just as their bodies perfectly read each other in movement: she earthy, her deep chestnut hair cascading down her back, his a more more serene, almost ascetic presence. Jointly they work out the split-second timing to bring together dance, music and visual effect just so.

It comes of a decades-long partnership, in life as on stage, Dana now a full co-creator rather than just an interpreter of Russell’s choreography, although, she laughingly says: ‘I’m sure he would prefer it if it was a dancer/choreographer relationship! It’s interesting, because we’re a couple…

Russell interjects, ‘… and we’ve been a couple for 25 years…’

Dana goes on: ‘and I’m not really the kind of woman in the couple that just takes notes, so I have to have a different approach when I’m in the studio, and sometimes the crossover is tricky.’

Dana Fouras created the music for the two Julian Broad films and the live pieces in maliphantworks3: the new The Space Between and Duet, which they are reprising following its 2018 premiere.

The bits of score I heard played out of a computer during this rehearsal are hard to describe: it’s a soft, flowing, a little ‘plinky’ sound, which points towards the East, as indeed does some of the choreography.

Again, it seems, that was not intentional.

Dana explains: ‘It’s something that evolved. I never set out to make it Eastern flavour, or quality, and I think that what is a strength is that I have a good response to things. So, we’re in the neighbourhood of the same aesthetic, and Russell likes it, so then it encourages me.’

Russell adds: 'I would say that I’ve engaged with a lot of Eastern physical language, but only in an exploration of qualities of movement vocabulary, movement sensations; and that informs some of our improvisation. I don’t think there are any movements that are a particular movement from an Eastern [tradition]; but again, maybe with the timing or the quality, it does tend to give that association.'

Dana: ‘Working with Stevie Stewart, our costume designer that we’ve worked with for many years now, for me I really like to work with the costume that I have and I find it interesting.’

They have been rehearsing in the costume trousers, made of a material that has both weight and flow, so that it not only accompanies the dancers' movement, but also somehow helps shape it.

Russell starts: ‘There are things in those costumes that if you do certain movements, it just doesn’t make any sense. Certain things really do..’ and Dana continues ‘… so we follow those things and then it becomes an organic process.’

maliphantworks3 marks the third time Russell Maliphant brings his work to The Coronet Theatre, a space both he and Dana Fouras love.

Dana interjects: ‘… but it’s not too close! It has a very special energy in that room, it’s also one of my favourite places to perform – I love it!’

Later Russell would add that another plus is that The Coronet Theatre affords them longer residencies (two weeks in the case of maliphantworks3), and this allows the performance the time to bed in properly.

And then, of course, there's The Coronet's uniquely inviting bar, a mix of library and, in Dana's words, 'speakeasy', where performers and audience can come together – and often do.

maliphantworks3 is at the Coronet Theatre 6-22 February. Details and tickets here

This article's banner image was kindly ceded by the photographer Nicola Bensley
Share: