1 CW reader is interested
Jeyasingh's Bayadère – The Ninth Life Review 4 Jeyasingh's Bayadère – The Ninth Life Review Ruth Mattock
British-based Indian choreographer Shobana Jeyasingh straddles two cultures; and as such could not but ask a lot of questions of the 19th century's very Eurocentric fascination with the Orient, as epitomised by Petipa's ballet, La Baydère.

So she set about radically reworking the ballet as a way of illustrating a clash of cultures. Jeyasingh's La Bayadère – The Ninth Life premiered in 2015 at Covent Garden's Linbury Studio and was an instant hit. Two years later the choreographer has now reworked the piece for the much larger Sadler's Wells stage.

It's still a work in three distinct parts, but now it boasts new sets and costumes by Tom Piper and enhanced video projections by Sander Loonen, as well as a longer conclusion.

The premise is the same: a bored young Indian man sitting in a hotel room in Hyderabad starts texting his brother, Jaz, in Paris. The texts are projected onto a screen on stage, and so we're able to hear and read the conversation: how the brother was dragged by his girlfriend to the ballet. They saw La Bayadère. 'Pure Bollywood' is the brother's verdict, and he mockingly describes the noble warrior in love with the bayadère, or temple dancer, but made to marry the Rajah's daughter, the bayadère killed by snake bite on the orders of her rival, and an other worldly second act set in the Kingdom of the Shades, in the tormented warrior's opium dream .

At this point, and despite all the mocking, Jaz says: 'I could almost imagine myself in the story.'

Cue Part 2, where he indeed becomes part of the story and is turned into a bayadère, attired in bright red soft flowing pants, Indian jewellery, and white fan. Thus he poses, offering himself to the inspection of the curious. As the new sets, representing elaborate Indian arches and gateways are brought on stage, we are transported to a realm of the imagination. Gabriel Prokofiev's eloquent score is overlaid with voice over diary entries from the 19th century French writer Théophile Gautier, describing his impressions of a tour of Europe by five Indian temple dancers.

Jayasingh's choreography is a skilful blend of references to the original ballet - a sequence of steps here, a characteristic prop there - and contemporary dance. Her 11 dancers, serve her style of classical, contemporary and occasionally Indian dance to perfection. Particularly remarkable is Sooraj Subramaniam, whose dance training includes classical and contemporary, as well as India's bharatanatyam, in the leading role.

This section is all about the wild fantasies of Europe's Romantic imagination. Repeatedly we hear the bayadère described as asiatic, alien. Her features, too, come across as alien from her very white teeth to the gaps between her toes. And yet, Gaultier muses, her gestures, though alien, are never savage.

The atmosphere is dreamy, as if by contagion from the original opium dream; except here the dancers are no longer Shades in a drug-induced vision, but have become the Shades of Gautier's Romantic (and unwittingly racist) longings.

The third part of the piece is the most abstract; and in this new iteration of the work perhaps the less satisfactory. It brings us back to earth with a bang and indeed a very uncomfortable burst of naked lights right in the eyes of the audience, but carries no resolution. Rather, with the dancers divested of most of their specific costumes, the choreography becomes edgy and disquieting, confrontational, a fevered clash of bodies competing for supremacy. It seems, though, that extra choreography was added here, with the result that this final section felt too long and somewhat repetitive.

No matter: this is by any measure a remarkable work: intelligent, thought-provoking, immensely accomplished in its choreography, staging and dancing. 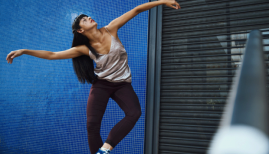 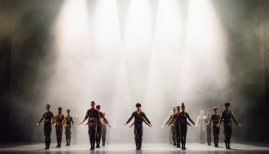 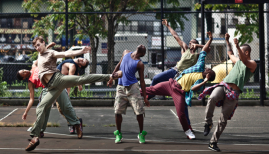