Dorrance Dance takes tap into the electronic age in ETM: Double Down, an eclectic work electrifying audiences at Sadler’s Wells

Dorrance Dance is an New York based tap dance company who have made it their mission to “blast open” our notions of tap through experimentation with the capabilities of performers as both dancers and musicians. In the case of ETM: Double Down this is done with an earthy, rhythmical take on tap, utilising electronic triggerboards. This is a show where the dancers are also the musicians.

The show is so intensely technical one is entirely absorbed by these dancers fulfilling the role of musicians, while the remainder of the company dance to their uniquely coordinated rhythm, introducing hip-hop, street and contemporary moves to the stage simultaneously. Dorrance’s newest collaborator, b-girl Ephrat Asherie, brings her signature energetic style and finely nuanced footwork to the stage, mightily impressive for someone who claims to only dabble in tap.

The choreographic episodes of the first act are non-linear, and start as simple musical loops that are slowly built up and broken back down again by dancers atop platforms. It’s a slow start, almost as if the dancers’ warm up is part of the performance; but the tapping feet and repetitive loops are strangely hypnotic and it’s hard to take your eyes off them: should a beat be missed on the electronic plates it would be glaringly obvious.

When they dance en masse, the seven dancers (including Michelle Dorrance herself) ooze that underground New York vibe you would expect. They have a delightfully laid back and comfortable style despite the complex choreography that requires dynamic physical agility and acute musical phrasing from all.

It’s easy to be enticed by Dorrance’s selection of alluring performers. Warren Craft appears to posses legs made of rubber bands. His comedic instability in the first act creates the impression his lanky limbs may give way at any moment.

I was also struck by the charismatic and effortless technique of the piece’s co-creator, Nicholas Van Young, “the man behind the curtain” as Dorrance describes him, whose sporadically appearances bring an unfailing energy to the proceedings. Overall, it was heartening to watch a company where each contributor stood out as an individual with unique personal attributes.

Some sub-sections of the choreography are weaker and less engaging, however. Just before the interval there is a repetitive interlude which utilises chains and drums which, for me, spilt over from melodic to pure unadulterated noise. There was also occasional scraping of a tap shoe along a stage which was unpleasant to the ear.

This small glitch in Dorrance’s whacky antics can be forgiven in an altogether more exciting second act.

Musician Aaron Marcellus sings a heartfelt acapella solo. There’s a shift in lighting and staging to a more traditional set-up with musicians at the back and the dancers centre stage. The more lyrical second act is where we firstly start to focus on the relationships between the different company members. Gone are the high-energy, synthy sounds as two male dancers perform an intricate contemporary number. It’s full of demanding movements within the interplay of their two contorted bodies. It’s a surprising addition and reminder Dorrance Dance is not capable of more than the flashy crowd-pleasing numbers ETM is packed with..

The company leave some energy in reserve for the exhilarating final ten minutes, culminating in a relentless hammering of the stage. There are triggerboards aplenty and melody on top of melody, all of which builds to a wild cacophony and a thrilling finale. 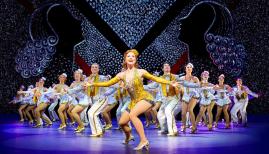 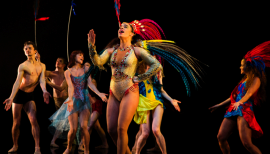 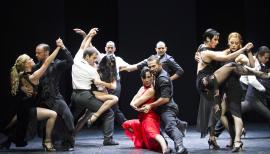