Dein Perry’s Tap Dogs returns to the London stage with a thrilling show like no other, running for a three-week run at The Peacock Theatre

An Australian sensation, Tap Dogs was devised by Dein Perry in 1994 with the show debuting at the 1995 Sydney Festival. It has gone on to receive numerous international awards and enjoyed a lengthy run of uninterrupted touring around the world.

On first inspection the set appears simple, if a little haphazard, with a central platform for tapping and a staircase behind, but with each new section the set unfolds to create a fresh setting, and the cast act as workmen on a building site. There are metal arches which they swing from, and platforms created from steel girders that are later filled with water to create a memorable finale. With each set change the technical demands increase.

Each dancer brings their own style and flair that Perry incorporates into the staging and choreography. As the foreman, Anthony Russo is the leader of the tap pack, who orchestrates the set changes. He takes great pleasure in berating the show’s youngest contributor, Kid Reid Perry, whose cheeky asides to the audience ensure popularity. His tapping is fast but controlled as he nonchalantly balances en pointe in his tap boots.

Sam Marks, aka Rover, is the most charismatic performer, his musical theatre background shining through, and his more elaborate moves and references to Saturday Night Fever providing a contrast to the manly vibe of the troupe. He is often teased, encouraged to rein in his more exuberant signature style.

Dein Perry's Tap Dogs is evidently a show these performers know inside out, and they treat its obvious complexity with almost unbelievable slickness. There is a section with basketballs in which they bounce the balls in unison through their legs (while tapping), creating a basic rhythm; but they then break off into subsections, bouncing the ball at alternate times to create a soundtrack to dance to. In another sequence, one dancer is strapped into a harness and pulled upside down in order to tap on the metal ceiling of one of the structures.

The water-filled climax to the show is an ultimate crowd pleaser and the performers, although visibly tired, do not lose their sharpness as they dance on different levels of the steal girder platforms. The ending is marked by the celebratory opening of a can of Fosters. Of course.

A couple of the concepts lack originality, such as the dancing on different electrical plates to create a rhythm but the Tap Dogs will still win you over with their personalities. Numerous microphones are dotted about the stage to enhance the sound of the tapping, which can occasionally be little too loud for comfort. The mostly young audience’s delight at the troupe’s energy evokes the feeling of a rock concert –each section’s finale is met with raucous screams.

Arriving just in time for half term, Tap Dogs is an exhilarating night out: it won’t tax the brain and, at eighty minutes, seat fidgeting is likely to be minimal too. 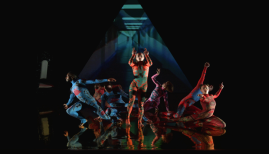