Made up of eight dancers, Ballet Black may be small, but it’s tremendously successful. Britain’s only ballet company for dancers of black and Asian descent, just one year short of its 20th anniversary its audience has grown exponentially and includes sections of society that other ballet companies can only dream of attracting.

During lockdown Ballet Black has been deprived of direct contact with audiences, but like its counterparts in the dance world it has now gone digital with an initial offer of three works to be made available online in successive weeks through the company’s social media platforms.

Sunday, 17 May and for seven days afterwards
Cristaux – A glittering portrayal of crystals in all their glamour and coldness, this pas de deux by award-winning choreographer Arthur Pita is a characteristically sideways look at courtship. With costumes by Yann Seabra adorned by no less than 2,000 Swarovski crystals, Cristaux draws a meticulous performance from Ballet Black veteran ballerina, Cira Robinson.

Sunday, 24 May and for seven days afterwards 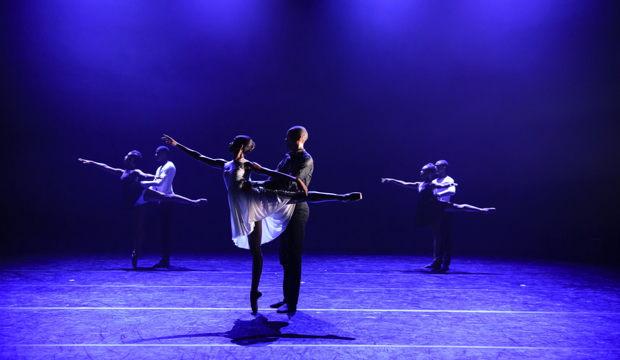 Ballet Black, Depouillement. Photo: Bill Cooper
Depouillement – William Tuckett is one of the most interesting choreographers working today, and in this piece from 2009 he sought inspiration from Ravel's 'Sonata for violin and cello'. As Tuckett explained to Culture Whisper, Ravel based his composition upon Debussy's notion of depouillement (economy of means): 'The music is stripped down to the bone. Harmonic charm is renounced, and there is an increasingly conspicuous reaction in favour of melody'.
Tuckett combined 'a musical interest in the contrapuntal aspects of a reduced sonata form... and a choreographic version of that with a company that presents equally pared down work - without sets and minimal costuming.'
In the 10+ years since Depouillement was created, Ballet Black has evolved and become more ambitious in terms of stage design, but Depouillement concentrates entirely on choreography and form, following Ravel's composition, which, as Tuckett puts it, 'despite just the two instruments, contains all the genius of those long Ravellian lines interspersed with rhythmic energy.'