Akram Khan’s much anticipated Creature, his third commission for English National Ballet, has finally had its world premiere at Sadler’s Wells

Creature had, therefore, a lot to live up too. Did it? Not really, no.

Set in a dilapidated former Arctic research station, Creature follows the grinding down of the titular character, a poor conscript from whom, in the name of science, everything is gradually taken away: his dignity, his health, his sanity and finally Marie, the woman he loves.

The positives first. The production values are very high: Tim Yip’s set, a vast wooden shack denuded of any human comfort, creates a stark, disquieting atmosphere, which builds up to a fearsome finale. Michael Hulls’s lighting design, working mostly with blue hues, expertly evokes the harshness of the Arctic cold, subtly creating fleeting moments of warmth for the brief interactions between the Creature and Marie.

Vincenzo Lamagna's score and sound design, harsh and brutalist and often very loud, is deeply unpleasant on the ear, but a good fit for its subject, its instrumental elements masterfully executed by the English National Ballet Philharmonic under Gavin Sutherland.

And above all, the dancers of English National Ballet were in tremendous form, the ensemble, an army in white boilersuits, energetic, disciplined and often menacing; the soloists going a long way towards inhabiting their sometimes sketchy roles. 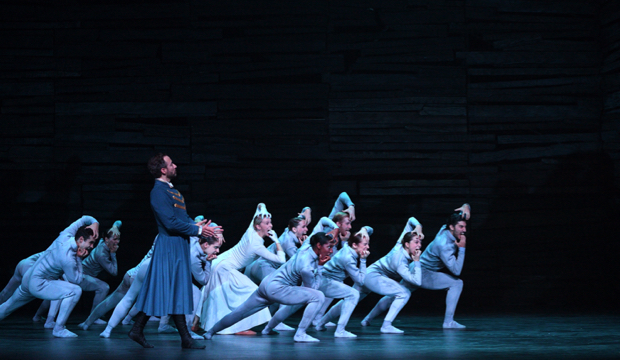 English National Ballet in Creature by Akram Khan © Laurent Liotardo
As the Creature Jeffrey Cirio was simply wondrous. Every gesture of his body, every bend of his torso, every jump, every haunted look carried a wealth of meaning, an appeal to our compassion and outrage at the cruelty of man to man (and woman).

That our feelings are not as deeply stirred as Cirio deserves is due to the work’s seriously deficient narrative (dramaturgy by Ruth Little).

Khan drew inspiration from a number of sources, starting with Frankenstein, a powerful example of man playing god with horrific consequences, and then Georg Büchner’s seminal 19th-century play Woyzeck, the story of a poor demobbed soldier driven to madness and murder by ever more extreme experiments carried out on him by an army doctor.

Yet, unless you brush up on your Woyzeck and carefully read the programme synopsis beforehand, it’s often impossible to follow what’s happening in stage, particularly in Act I. There is no narrative tension, structure or clarity. Though Khan’s choreography is characteristically muscular, particularly for the ensemble, if mostly fails to serve a narrative purpose.

Worst of all, to have such accomplished and affecting dancer as Erina Takahashi spend most of her time as Marie mopping the stage seems an unforgivably missed opportunity.