People of colour have been telling their own story for generations, and they tell it better than anyone else. Here are some of the books that illustrate that story 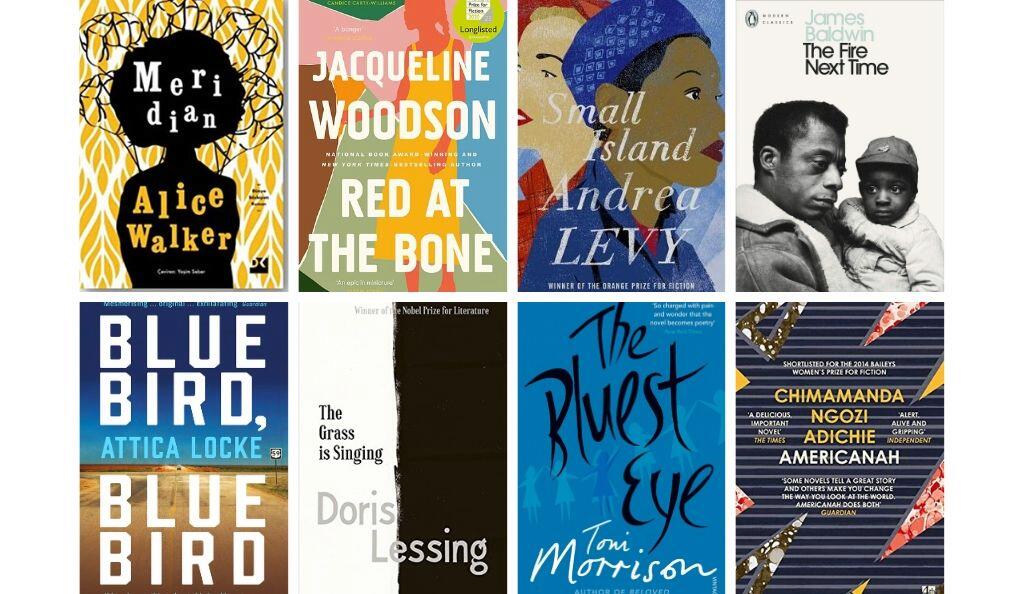 My love affair with African American literature goes back a long way. I can’t even remember what started it – perhaps the feeling that there was a story worth delving into, an ages-old, complex, compelling, multi-faceted story; and who better to tell it than those who live it?

For whites, the modern day story of African Americans starts with the monstrous exploitation of slavery, the white man’s arbitrary conviction that his was the dominion over everything and everybody else, and that included the right the enslave and dehumanise fellow human beings for economic gain.

It is a past that still colours every single interaction between white and black, and also, interestingly, between black men and women. A, recurring theme in black literature is the central figure of the woman, the steady anchor of conflicted communities and the repository of their cultural memory.

However, for African Americans their story starts much before they crossed our narrow consciousness: it started in their African homelands centuries – millennia even – ago, and is defined by ancestral cultures and beliefs, which persist in their collective memory and blend with what’s passed since to create one of richest melting pots in today’s world.

Free from slavery, but hemmed in by systemic racism, American people of colour have documented their lives and struggles in a veritable treasure trove of novels, essays, thrillers, and poetry, which provide a rich, ever fascinating and on-going story.

International recognition came – belatedly, I would argue – in 1997, when Toni Morrison became the first African American to be awarded the Nobel Prize for Literature.

I have compiled a list of some of my favourite books pertinent to the harrowing events of the past weeks in the USA. With three exceptions, they are the work of African American writers, the vast majority women. Novels predominate, but one is a book of essays. And for good measure I’ve thrown in one book set on these islands. 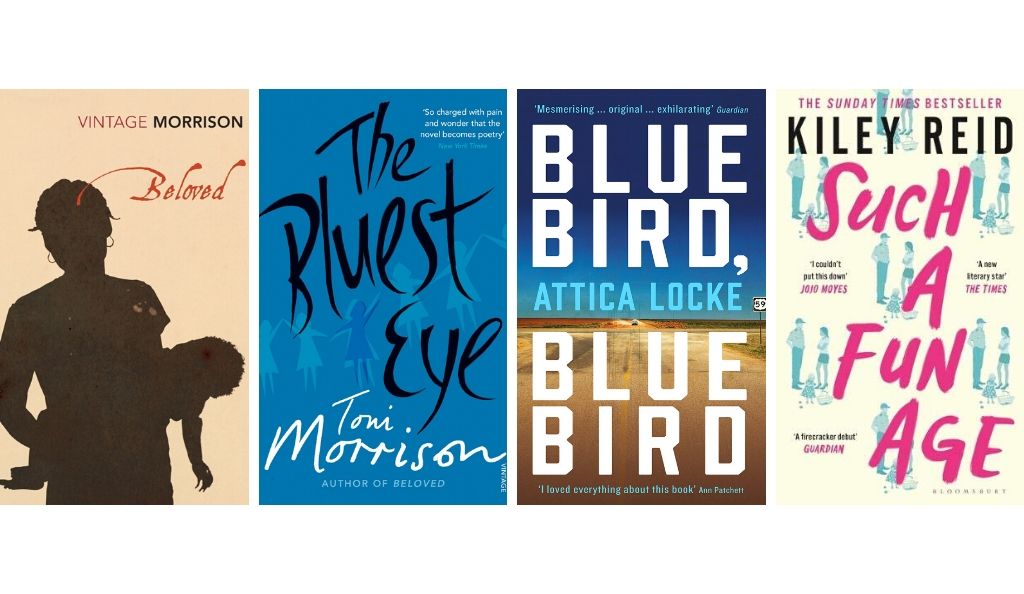 – Toni Morrison, Beloved
The undisputed first lady of African American letters, Toni Morrison’s mastery of the English language coupled with her powerful imagination and a gift for transporting story-telling allows her to blend lyricism and gritty realism in the horrific story of the escaped slave Sethe, who, fearful of imminent recapture, kills her baby child, Beloved, to release her from a pre-ordained life of slavery.
Set in the American South in the 1800s, Beloved is rich in social and historical detail, and uncompromising in its description of the staggeringly cruel treatment meted out to slaves. It immerses the reader right into the culture of its characters, and in its use of a spirit thirsty for revenge draws from ancestral beliefs.

– Toni Morrison, The Bluest Eye
An early Morrison novel, The Bluest Eye was published in 1970. Set among a poor black family in 1940s Ohio, it tells the story of young Pecola, who is sure that if she could be granted blue eyes, like the white girls in her neighbourhood, she could become lovely and therefore be loved.
The novel goes a long way towards making the reader understand how years of being at the receiving end of hate and scorn and deprivation creates self-hate even in a very young child.

– Attica Locke, Bluebird, Bluebird
Crime novels often provide a sharp insight into society, more so when their author is, like Attica Locke, a talented wordsmith and a mean plotter. Locke sets her story in her native Texas, where her black Texas Ranger protagonist, Darren Matthews, embodies the contradictions of being simultaneously a black man and a law enforcer in a racist backwater. It’s a vivid thriller, a page turner that obeys many of the conventions of the genre and yet is fresh and original.

– Kiley Reid, Such a Fun Age
A little gem of a first novel that manages to combine a young, sassy, often very funny contemporary voice with a subtle look at hidden, often unsuspected – well-meaning even! – racism. It starts when the narrator, a black baby sitter, is accused of kidnapping her white charge. From then on it evolves in eventful, unexpected, and always enjoyable ways. 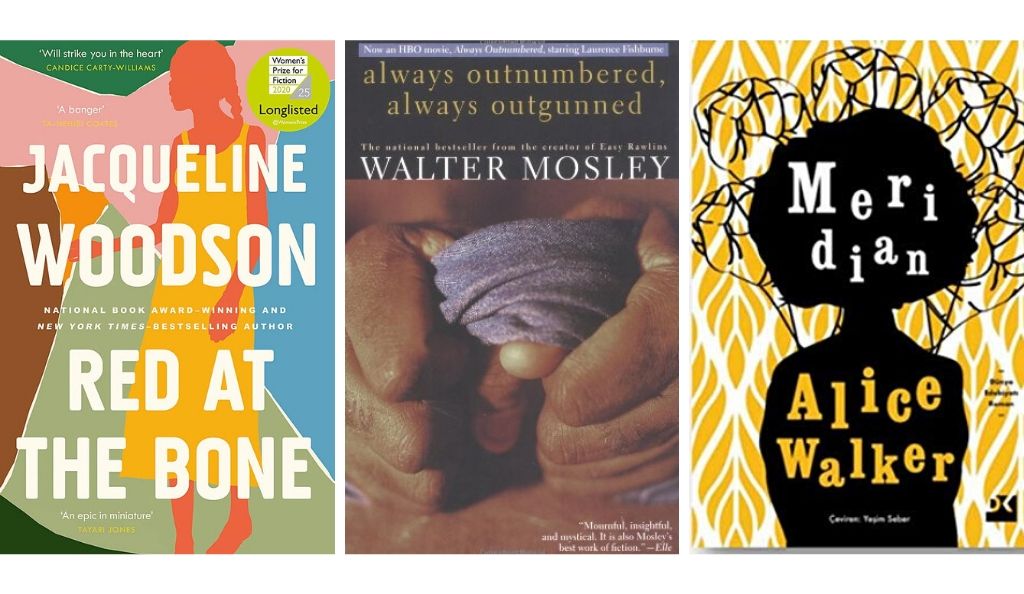 – Jacqueline Woodson, Red at the Bone
Despite its title, this is a gentle snapshot of three generations of middle-class black Americans. It starts in 2001 with the coming-of-age ceremony of 16-year-old Melody in her grand-parents affluent Brooklyn brownstone. Slowly, through the eyes of the five main characters, we get the backstory: Melody is the product of Iris’s teenage pregnancy. We hear from both, from Melody’s adoring father Aubrey, and from her grandparents Sammy and Sabe, whose mother was a refugee from the 1921 Tulsa massacre. Through a wealth of detail Red at the Bone paints a delicate and vivid picture of complex human beings, whose lives are marked by race but transcend its limitations.

– Walter Mosley, Always Outnumbered, Always Outgunned
Mosley is perhaps best known for his crime series centred on black PI Easy Rawlins, some of which have been adapted to the screen with the dashing Denzel Washington as Rawlins.
Always Outnumbered, Always Outgunned, though, is a stand alone work of poignant beauty. Socrates Fortlow has spent 27 years in jail from a crime of violence, and now that he’s out he’s determined to seek redemption and help the oppressed of the Los Angeles ghetto, ‘to ease the evil deeds he had perpetrated.’ His name is not a coincidence: rather, like his more illustrious Greek namesake, Socrates Fortlow asks questions of the world around him and in doing so captures the moral ambiguities of his time.

– Alice Walker, Meridian
Alice Walker’s best seller is The Colour Purple, which was made into a hit film starring Whoopi Goldberg, Oprah Winfrey and Danny Glover, and is probably at the pinnacle of her prolific output. However, Meridian is a very interesting novel, which raises the question of the extent to which harmonious racial integration is possible in the heady days of the 1960s civil rights movement.

I would now like to look at three novels, which are not the work of African American authors, but each in its own way throws light in questions of race and human relations. 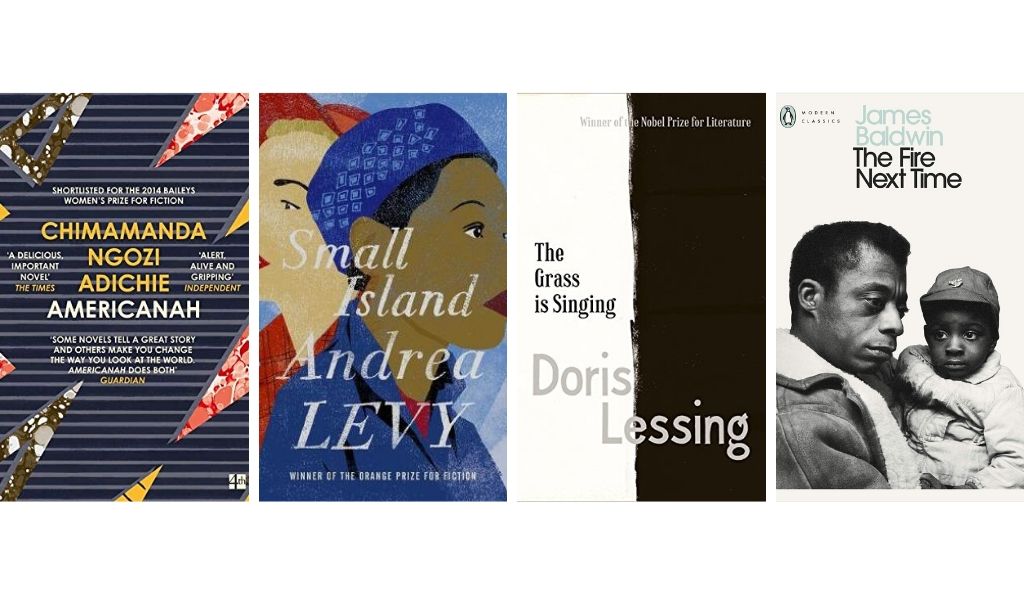 – Chimamanda Ngozi Adiche, Americanah
The central section of this most enjoyable novel is set in the USA and contains the acute, often amusing observations of the protagonist, a Nigerian middle-class young woman, attending university in America, about the very foreign millieu she finds herself plunged into. The African perspective on American society, both black and white is fascinating.

– Andrea Levy, Small Island
Levy’s best-seller has acquired new relevance in the context of the ongoing Windrush scandal. Small Island is set in post-war Britain and follows some of the Caribbean migrants who came over to fill much needed jobs and met with appalling racism. Those where the days when rooming houses put up their infamous ‘no blacks, no Irish, no dogs’ signs. Yet, despite all that, there were acts of genuine love and acceptance. Just a reminder that the USA does not have a monopoly on corrosive racism

– Doris Lessing, The Grass is Singing
This is perhaps the best, most incisive portrayal of racism ever written. It is set in colonial Rhodesia (present day Zimbabwe) and tells the story of a white woman and her mix of attraction/repulsion for a handsome young black servant. Uncompromising and disturbing, this is a seminal dissection of the irrational feelings and instincts that coalesce into racism.

Finally a book of essays that became a classic of the African American civil rights movement:

– James Baldwin, The Fire Next Time
Black and gay, James Baldwin spent much of his life in self-exile in Paris. He was a prolific writer and any of his novels goes a long way towards illuminating the condition of African Americans in mid-20th century America. However, the two essays contained in The Fire Next Time explicitly analyse the many questions surrounding race in the USA. The first essay, in the form of a letter to his 14-year-old nephew, focusses on the centrality of race in the history of America. The second deals with the relations between race and religion.

Culture Whisper is your curated guide to the best of London. Commission for items purchased through retailer links in this article will be donated to Black Lives Matter.