Get the Best of London Life, Culture and Style
By entering my email I agree to the CultureWhisper Privacy Policy (we won`t share data & you can unsubscribe anytime).
Whisper

Benefits of music in early childhood

It's never too early to start exposing your children to music. Here are some of the best ways to introduce music into your child's life. 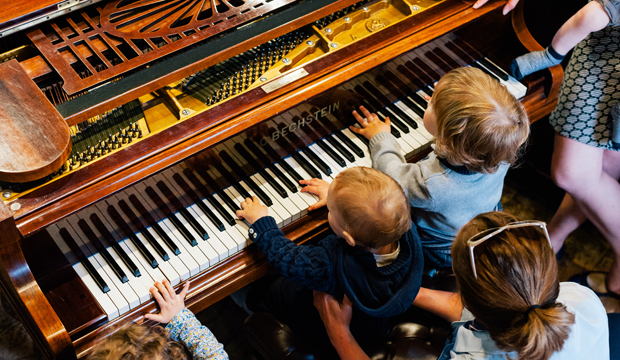 Introduce a lifelong love of music with baby concerts like Bach to Baby
It's never too early to start exposing your children to music. From baby music concerts to David Walliams' new classical podcast to listening to music anytime, anywhere, here are some of the best ways to introduce music into your child's life - with tips from Bach To Baby founder, pianist, Guildhall teacher and mum-of-two, Miaomiao Yu.

Music is a language that communicates without words, speaks to our emotions and stirs up feelings inside of us. Music can be relaxed and easy - it plays in the background while we cook dinner - or more of an occasion, like that first rock concert or orchestral performance we attend. Or, better yet, that first piano recital we play in.

The benefits of music extend far beyond its ability to make us feel something: studies have shown that babies who are still in the womb can start to develop a familiarity with music (they can hear from 18 weeks, and new research says it's better to play them classical tunes), and scientists have also concluded that music training can help children's brains develop faster. Some research has also suggested that music activities for toddlers are linked with improved social skills, numeracy and emotional development, much in the same way that sharing books with young children is hugely beneficial.

From the most casual way possible - singing "Row Your Boat" to your baby on the sofa while pretending you're in a boat - through to musical concerts and musical tuition, it's never been easier to introduce your baby to music - of any kind. Especially if you live in London. 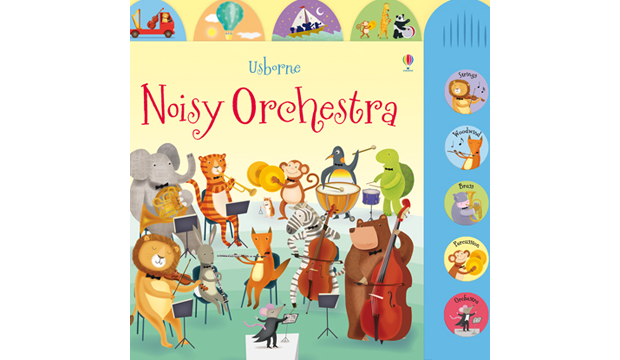 Musical toys and books are great for introducing baby to music

Books, toys and your local library
When you're a parent, music is everywhere, like early childhood development toys (rattles, maracas) and kitchen implements for baby to bang around the house. Little ones also love board books with buttons they can press to make noise, which can either play music (Noisy Orchestra from Usborne is an absolute gem, which breaks down the parts of an orchestra into strings, brass, woodwind etc, with different animals playing each instrument) or recreate the sounds of farm animals, traffic noises and more.

If you're interested in getting your baby involved in the local music scene - without paying a penny - your first stop should be the local library. They're likely to have a weekly babies and toddlers singing class with nursery rhymes and favourite songs. Children's play groups also start little one on their musical journey.

Of course, if you're looking for a regular class to get you out and about with your baby, then a weekly music group can be a fun way for children to engage and start building up their social and communication skills, as well as for parents to get a bit of socialising in - early years music lessons can even help a child's brain development and can improve memory, according to science. 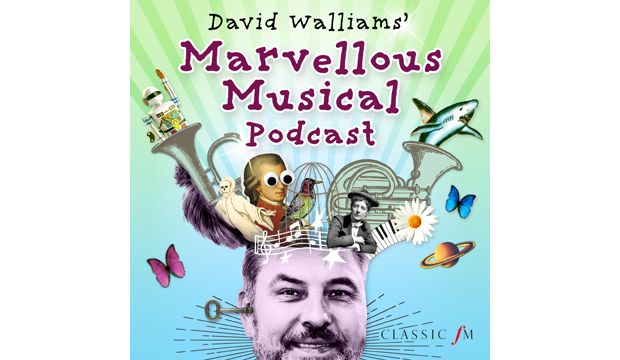 Classic FM has recently launched a free podcast for kids to introduce children to music in a fun way, hosted by David Walliams, whose charm and zany humour will have kids begging to learn every classical instrument (while also asking to eat broccoli, we'd wager). The 10-episode podcast educates 7-12-year-old kids about composers like Mozart and Beethoven - showcasing their personalities and musical styles - and gives them all sorts of fun facts about strange instruments and classical performers. 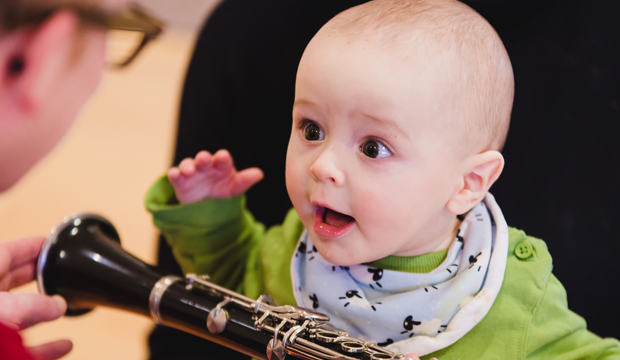 Mini Mozart, which offers classes all over London, encourages children to get up close and personal with instruments like the violin, French horn and trumpet, so the kiddos get a chance to interact with the music. 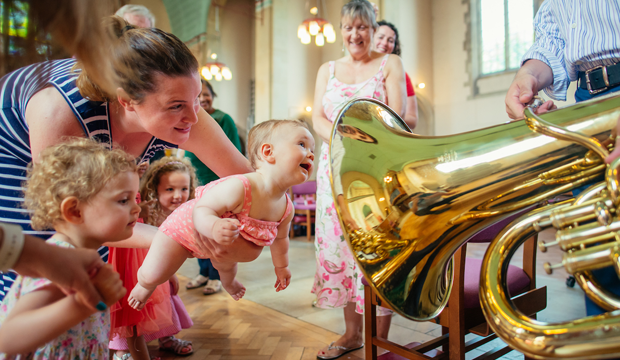 Getting up close and personal at a Bach To Baby concert

From baby to Bach to Baby
"My life is about music," says Miaomiao Yu, founder of Bach To Baby, which offers classical concerts for under-5s across London and the UK (look out for performances in Cambridge, Oxford and Birmingham, which have launched recently).

"I moved around and lived in so many different places around the world. Music was the constant. And it doesn't have a language barrier. Music was a very important way of communicating for me as a person and with other people."

The impetus to launch Bach to Baby came from Miaomiao's desire to combine her own personal cultural interests with motherhood, something she found other new mums craving as well.

"Having a child is life changing - but how do you retain that part of yourself that you love? That was the impetus to get it going and I think it's the zeitgeist of our generation of parents: wanting to have cultural, spiritual fulfillment and giving our children what we value most, that human experience," says Miaomiao.

As Miaomiao explains, your world narrows once you have a baby, and finding child-centric activities that are local to you becomes super important. Bach to Baby was born from her desire to hear classical music and her realisation that young children can't sit still - but that doesn't mean they shouldn't be exposed to music until they're old enough for formal training.

Bach to Baby isn't about introducing children to nursery rhymes; rather, they go to some of the most beautiful London churches and spaces, including Buckingham Palace, to experience a glorious setting with acclaimed musicians who perform at the international level. So all of the benefits of a top-quality musical concert, combined with the ease of knowing that if your child wants to have a meltdown, that's totally fine.

Which is key to making children start to connect with the music and enjoy it, Miaomiao believes.

"Music for children doesn't need to be dumbed down. If you have inspiring performers who really believe in their art, that passion and that quality will somehow pass through their music. If someone communicating the music feels the passion, that passion is passed on. If it’s something that you love, that you’re experiencing, then the child will at a certain stage see that the adult is enjoying it." 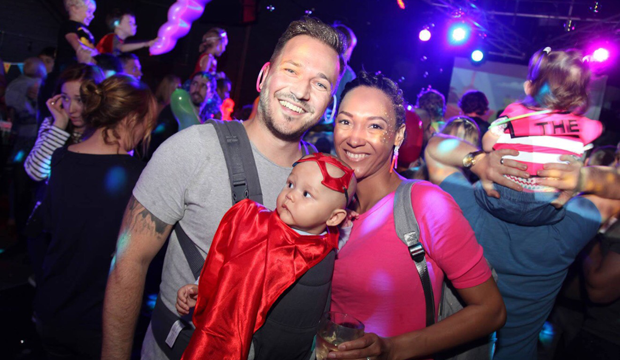 Raving with the kiddos at Big Fish, Little Fish

Other musical performances and classes for kids
As children get older, and learn to sit still, music tuition becomes a part of their school experience (who can forget playing "When the Saints Go Marching In" on the recorder terribly?), as well as a popular extra-curricular activity. As children progress with their instruments, there are opportunities for recitals and performances, and some boroughs have very strong music programmes you can apply for (e.g. Wandsworth Music Academy).

Even for children who aren't keen to pick up an instrument, musical opportunities abound, starting with the London concert and musical scene, with offerings for small people. Check out Kids Week, an initiative that runs each year and gives parents free kids tix with every adult ticket they buy for West End musicals like School of Rock and Wicked.

If your musical style is more 24 hour party people, having a baby doesn't mean your raving days are over: Big Fish Little Fish runs themed family raves around London with dance music, glowsticks, crafts galore and, crucially, beer and wine. And, come summer, smalls and bigs alike can put on their tutus, wellies and eco-glitter and hit the summer festival circuit at Camp Bestival and Port Eliot Festival.