Everything you need to know about the Trump Baby balloon

Baby got back-ing of London Mayor 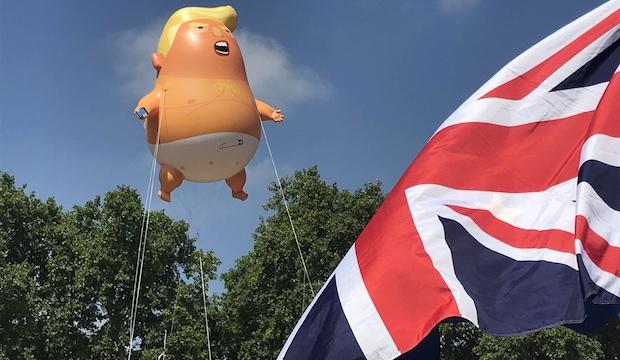 Trump Baby, Parliament Square. Photo: Harry Langham
Always wondered what Donald Trump would look like in a nappy? No? Fair enough – we’ll carry on anyway. On the morning of Friday 13 July (props to whoever chose the date), as London welcomed the US President for his first state visit to the city, thousands of Londoners gathered around Parliament Square to watch the maiden outing of Trump Baby – a 20ft, orange, smartphone-clutching, inflatable infant with a wotsit coif.

As news reporters assembled around the perimeter of the square, crowds of protestors and tourists alike assembled under blue skies to marvel at the stature of the baby – brainchild of Leo Murray, Royal Academy of Art graduate and grandson of the late Labour peer, Anthony Greenwood – all the while trying desperately to keep their breakfast down.

When and where the baby flew...

The blimp, which flew from 09:30am until 11:30am was just one part of a larger protest against Trump’s visit. ‘It’s on everyone who knows the difference between right and wrong to resist this grotesque excuse for a president when he comes here,’ wrote Mr Murray, in a column for Metro, before going on to claim that Trump ‘is a man who lacks the capacity for moral shame,’ and therefore that the only way to get through to him is to ‘get down on his level and talk to him in a language he understands: personal insults.’ 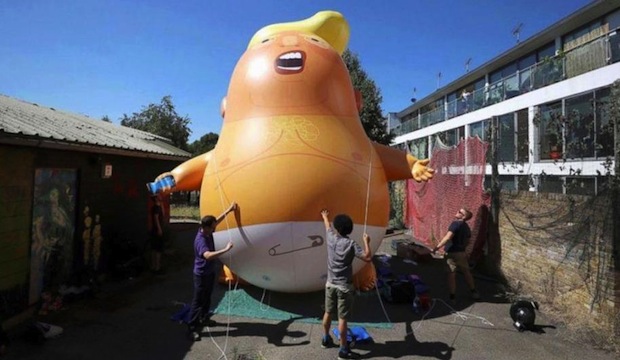 Initially rejected by London Mayor Sadiq Khan, permission was eventually granted for the six metre high, helium-filled Trump Baby, after more than 10,000 people petitioned for the right of the organisers to protest peacefully.

How have people responded?

Though many have lauded the inflatable infant, which Murray sees as a reflection of Trump’s character, an ‘angry baby with a fragile ego and tiny hands,’ as a very British act of protest, others have not taken to it so kindly. Former UKIP leader Nigel Farage described it as ‘the biggest insult to a sitting US president ever,’ whilst Republican overseas spokesman Drew Liquerman dismissed the protest as ‘cringeworthy’, before adding, that the stunt is unlikely to bother the president. A counter-protest which aimed to fund a Sadiq Khan baby balloon also received more than £10,000 of support, though there's been no sign of it thus far.

What's next for the Trump Baby?

Due to the success of the Trump Baby crowd-funding initiative, the team behind the stunt are now suggesting a Trump Baby world tour, proposing to ensure that wherever Trump goes, he’ll never be far from his floating, baby double.
Share: