It’s sounds too absurd to be true: like the plot of a bad Stephen Spielberg movie.

The twin cities of Thonis-Heracleion and Canopus were thought, for centuries, to be legends, like Atlantis. At the heart of an ancient Grecian trade route, they were supposed to be extraordinarily wealthy. Paris and Helen of Troy were stranded there, legend would have it. Hercules, the son of Zeus, popped round. But aside from fleeting mentions in ancient texts, not a trace of these twin powerhouses remained. They were consigned to myth.

Then, in 1996, after decades of searching the Mediterranean seabed, archaeologists discovered something extraordinary. Thousands upon thousands of objects in pristine condition, preserved by their 1,200 years of submarine slumber. This May, 300 of these objects come to the British Museum for Sunken Cities: Egypt’s Lost Worlds. 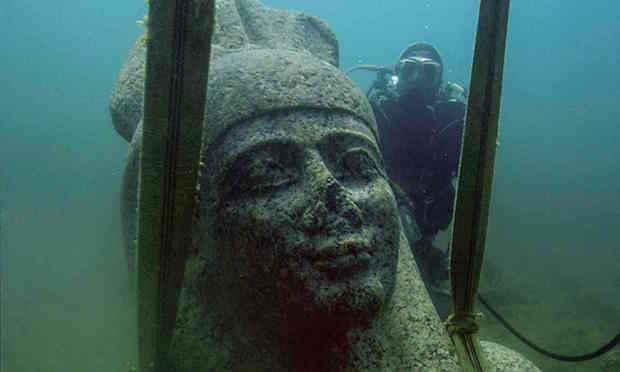 The British Museum have nailed this one. Granted, Ancient Egyptian gold coins, statues, sarcophagi, jewellery aren’t exactly a hard sell. But unlike the Sicily: Culture and Conquest show upstairs, the design of this exhibition is outstanding. The whole thing is bathed in watery blue light; we feel like we’re under the sea. Naysayers will call this cheesy; in fact, the effect is nothing but pleasant. It’s slow-paced: despite the wealth of objects on display, the exhibition never feels overwhelming. If we have a complaint, it’s that there’s slightly too much text. But then, this is the British Museum we’re talking back. Didactic and through wall displays are something of a given.

There are some downright masterpieces on display. At the entrance, we’re greeted by a 6 metre statue of Hapy, the pot-bellied god of the Nile's flood. A bronze cast of the bull-deity Apis is another highlight, as is the beautiful golden jewellery of ancient women, so well-preserved you'll want to take it home.

But, actually, the most powerful items on display are the more mundane. Crudely carved offerings to deities, lead food containers thrown into the Nile, part of a water carrier, a mummified bird. It is these objects, much more than the hollow-eyed statues, that resurrect the spirit of these sunken worlds. The effect is powerful and touching.