Not as magical as last year, but the new Summer Houses are well worth a visit... we review Serpentine architecture 2016

9 CW readers are interested
2016 Serpentine Pavilion review 4 2016 Serpentine Pavilion review Ali Godwin
Every year, the Serpentine Gallery in Kensington Gardens commissions an architectural firm to dream up a temporary pavilion in its grounds. Last year’s joyful structure was a tangled fairy maze; a chrysalis in mother-of-pearl. Purists sniffed, but we loved this building, which seemed to spring from the ground like a magic mushroom. Check it out below.

This summer's sober design by hip Danish firm Bjarke Ingels couldn’t be further from its 2015 predecessor. It’s colourless. It’s vertiginously high in concept: “an unzipped wall”, “freeform yet rigorous, modular yet sculptural”. It is (dare we say it?) downright ugly – from the outside at least – like one of those tiered structures used for awkward school photographs. 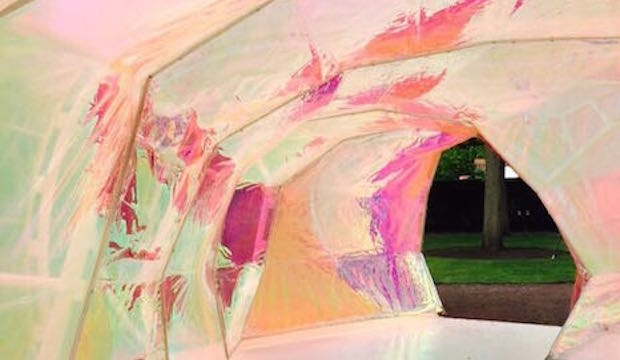 The stacked fibreglass frames are translucent. Why not make them transparent? The walls look like they’re made of concrete; it’s strangely oppressive. Last year’s design felt like an enchanted offshoot of nature. This one feels plonked down in the park. The cynical among us might wonder whether the architectural firm had ignored the brief, merely constructing a miniature manifesto.

It’s not all bad. Once you’re inside, gazing up and out at the park is a pleasure: tiled glimpses of grass and sky. Optical illusions abound. But the rich chestnut wood interior feels wrong next to the pigeon-grey fibreglass.

Perhaps it will look better when it’s lit up at night.

What the main pavilion lacks, the four Summer Houses make up for in spades. For the very first time, four smaller structures have sprung up alongside the pavilion, each designed by an upcoming architectural firm, in tribute to William Kent's 1734 Queen Caroline Temple, which sits nearby. 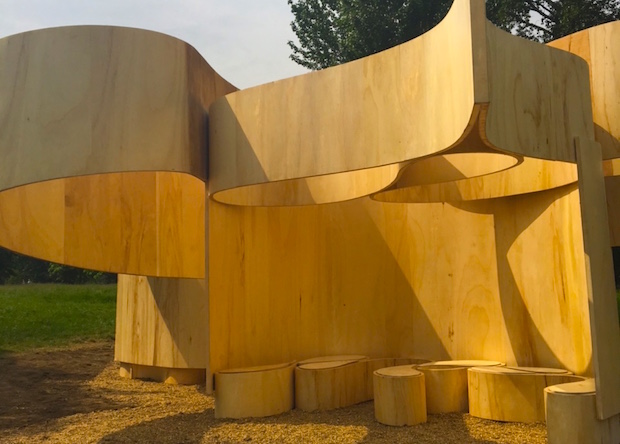 We loved the spiralling wooden design by Barkow Leibinger (above). Providing a shady seat for art-lovers and dog-walkers alike, this coiling structure is like a doodle in three dimensions.

Kunlé Adeyami’s Summer House is an inverse replica of the summer house, playfully transformed into an area to lounge – get up close and the white leather surface is a nice surprise. It’s futuristic, but also something you’d find in a ‘70s nightclub. A hunk of a structure (not unlike its creator).

Our favourite of all, though, was Yona Friedman’s Summer House. A series of copper hoops stretch crazily out towards the sky. The building is based on the French-Hungarian artist’s manifesto, L’Architecture Mobile, which champions the inhabitant as designer and master of his own living space, allowing for improvisation and autonomy. If that all sounds a bit obscure: don’t worry. The barely-there structure pulls you in with its yearning energy.