Visions of the Self: Rembrandt and Now, Gagosian ★★★★★

In the salaciously named The Prodigal Son in the Brothel (c. 1637), we see Rembrandt as an ardent young man enjoying the laurels of success with his new wife, Saskia, perched on his knee. Fast-forward 28 years later and see the difference between this painting and his Self-Portrait with Two Circles (c. 1665). Time has taken its toll. Saskia has been dead for 18 years, his second (common-law) wife, Hendrickje, for two. He holds his palette and brushes dutifully like an actor, as someone compelled to paint to elude poverty. Bankruptcy has wiped away his jovial smile and replaced it with the expression of a world-weary old man whose eyes are misty with the vicissitudes of life.

This remarkable painting is the focal point of Gagosian’s new exhibition, their contribution to the commemorations of 350 years since Rembrandt’s death. With the painting on loan from Kenwood House, Visions of the Self marks a new partnership with charity English Heritage which hopes to invite parallels between some of the greatest works of art history and more modern masterpieces.

This international gallery is known for representing the giants of contemporary art, so they’ve sought to offer some jazzy riffs on Rembrandt’s work by displaying it alongside self-portraits of its biggest heavy-hitters.

This perhaps explains what Andy Warhol's infrared face is doing staring down Rembrandt’s across the hall. He’s part of the orbit around the star painting which includes some of the most famous self-portraitists of the 20th century. There’s a portrait by British painter Lucian Freud and a broody black and white image of American photographer Robert Mapplethorpe. Joining the self-portrait party is also an enigmatic painting by Roy Lichtenstein and a life-size naked mannequin by sculptor Charles Ray.

But these depictions of virile young men, fibreglass Ken dolls and polka-dotted pop-artists are somehow too buoyant to sit alongside Rembrandt’s resigned likeness. The problem of including works in this exhibition just because they fall under the rubric of ‘self-portrait’ is that not all self-portraits are made equal, and many lack the psychological intensity that is so moving in Rembrandt’s work.

There are parallels that work extremely well. Pablo Picasso’s Self Portrait (1972), painted a year before his death, conveys the irascible crankiness of an old man who, having mastered form, rejects it through hurried sketching to create a caricaturish outline of bulging eyes and a bald head. It is the same ‘rage against the dying light’ which we feel through Rembrandt’s proto-Expressionist strokes. 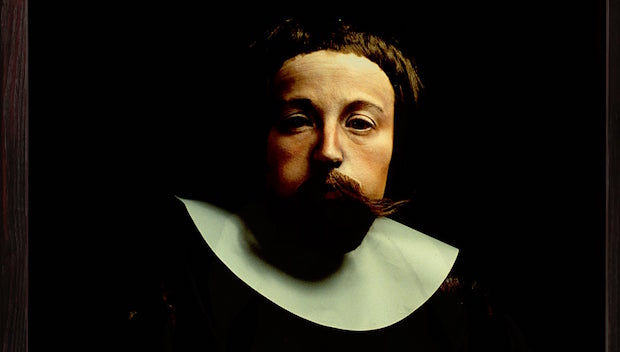 Cindy Sherman’s work also provides an interesting counterpoint. A photographer known for mining art history for her painterly compositions, she casts herself in a ruff and velvet doublet, playing with established visual symbols to throw gender identities into flux. She excels at manipulating an inherited visual language, just as Rembrandt was a master of using sartorial dress and objects to speak a language of status and wealth.

It is not that all of the surrounding self-portraits have to represent aged sitters, indeed that would have been impossible for some of the artists on display, such as Jean-Michel Basquiat. But there needs to be more discriminating degree of curation if you’re going to celebrate a singular artwork such as this. One of the great qualities of this painting is the splendour of the painter’s late-style. Subjectivity arises from an acute awareness of age and mortality – a sense of introspection which marked Rembrandt out from other painters of his time. Displaying work that doesn’t have this same power fails to do justice to the great achievements of the artists on display, and to Rembrandt.