Inside – Artists and Writers in Reading Prison ★★★★★

Quite simply astounding. Drop everything and go: Ai Weiwei, Steve McQueen and Patti Smith: the first ever Reading Prison exhibition

Most of us will never see the inside of a prison cell.

This September, though, you have the chance to – many chances, in fact. For the first time in its history, HM Prison Reading (or, for Oscar Wilde fans, Reading Gaol) has opened its doors to the public for an exhibition, ‘Inside – Artists and Writers in Reading Prison’.

Ai Weiwei, Patti Smith, Marlene Dumas, Nan Goldin, Steve McQueen, Ben Whishaw, Wolfgang Tillmans. Some of the biggest names in art have assembled for this exhibition, responding to themes of isolation, imprisonment and Wilde – the jail's most famous inmate. INSIDE is once-in-a-lifetime kind of good.

The set-up is this: you walk through the prison, which has been closed since 2012. You wander up the stairs and down the walkways, through corridors, wings and cells. Some doors are open, some closed. Here and there, you’ll come across art, roughly hung, unfussy, no pomp or ceremony. Some of the works you’ll have to search around the cell for. There is a mixture of visual art and Letters of Separation – which you can either listen to on headphones or read on manuscripts. 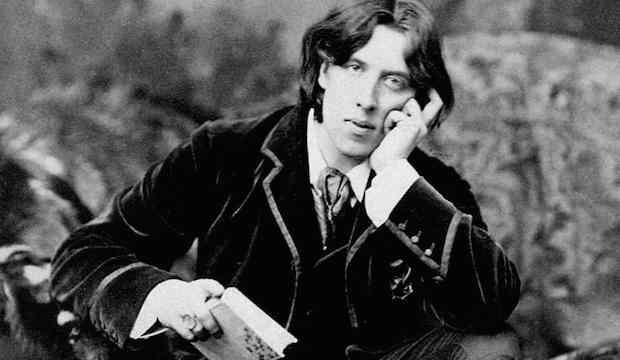 There is one work of art whose shadow looms large over the exhibition. Oscar Wilde wrote De Profundis in 1897 while he was imprisoned for his homosexuality. It is a philosophical treatise, masquerading as a love letter to his lover Bosie (or Lord Alfred Douglas). The prose work is a searing examination of spirituality, sin and incarceration: “The most terrible thing about it is not that it breaks one’s heart—hearts are made to be broken—but that it turns one’s heart to stone.”

Each Sunday, writers and performers including Neil Bartlett, Ralph Fiennes, Maxine Peake, Lemn Sissay, Patti Smith, Colm Tóibín and Ben Whishaw will pay homage to Wilde by reading De Profundis in its entirety in the prison chapel – though these performances are mostly sold out.

Many of the works respond directly to Profundis, whether through references to Wilde himself, or to the persecution of homosexuals. In one cell, you’ll find Nan Goldin’s film, which follows the life of a 93-year-old man (the oldest gay in the village, as he puts it) who is campaigning to have his criminal charge for ‘Gross Indecency’ dropped before his death. “I was born only to love another man”, he says. “How can that be a crime?”. There are, shockingly, 20,000 gay men in the UK who still have criminal convictions. 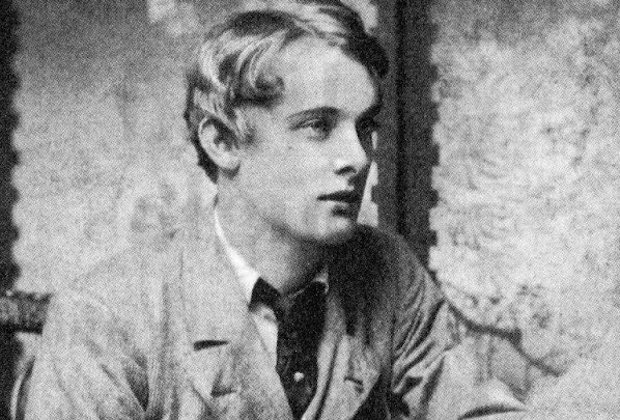 Marlene Dumas has painted her trademark square portraits of persecuted gay artists and their lovers, including Pier Paolo Pasolini as well as Jean Genet’s longstanding beau, and in one particularly moving cell, Pasolini’s mother. The implication is that each subject is imprisoned, but that the persecuted men are not the only ones suffering – homophobia destroys families.

Other works speak more generally of incarceration. Grown men were brought to tears by Ai Weiwei’s letter to his son (honestly – they were Times journalists). The Chinese artist wrote to his young son while under house arrest – and it’s a gut-wrencher. Jeanette Winterson writes as Shakespeare’s Hermione in her letter, To Perdita. From A Winter’s Tale, Hermione is a mother forced to abandon her daughter – Winterson’s prose is a bruising account of abuse and misogyny.

American sculptor Robert Gober has created two extraordinary works, which explore the idea that we are trapped inside our exteriors. Seemingly straightforward objects – a wooden chest and a suit jacket – buckle and burst open, revealing riverbeds lined with trees and running with water. We’re shown inner life – true selfhood. 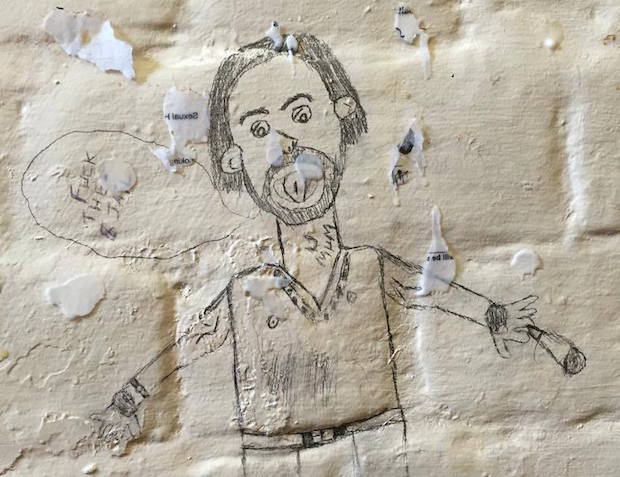 'FUCK THE JAIL': A prisoner's graffito self-portrait, which hangs next to a Marlene Dumas portrait

Perhaps the most moving works, though, are the graffiti on the walls of the cells. Whether a simple tag, a cartoon or an arch ‘ROOM SERVICE’ penned above a cell’s alarm button, these markings feel as old as humanity itself. From 10, 000-year-old hand prints on cave walls, to 500BC penises carved onto rocks, to the tags on NYC subway trains: we've always been seduced by the idea of leaving some permanent mark on our surroundings. You wonder where these men are now.

In one cell, there is what appears to be a monument to hope. Steve McQueen, director of the Oscar winning 12 Years A Slave, has draped a gold-plated mosquito net over the bunk bed. In front of the window, it catches the light, which beams goldenly off of it. You get a sense of longed-for freedom – but also some benign, ever-present protection. Both an elegy and a rallying call – especially when you consider Wilde's words:

‘Outside, the day may be blue and gold, but the light that creeps down through the thickly-muffled glass of the small iron-barred window beneath which one sits is grey and niggard. It is always twilight in one’s cell, it is always midnight in one’s heart.' 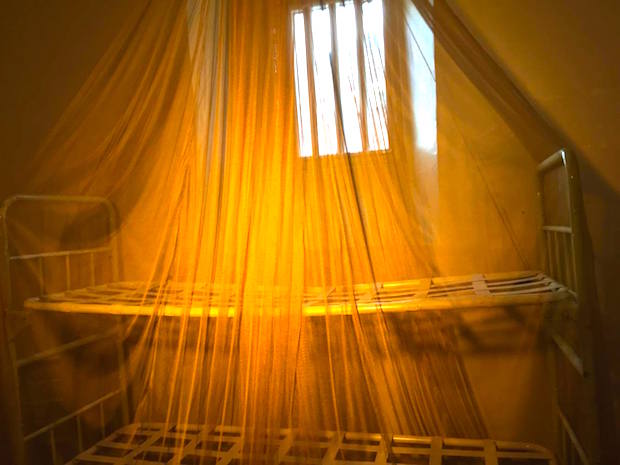 Tickets are still available but should be booked ahead. However, tickets for the live performances are sold separately and are almost completely sold out.