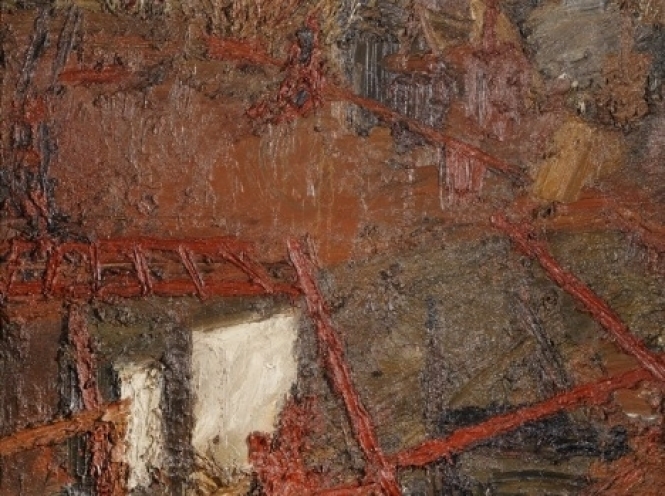 With Tate Britain’s announcement of a major retrospective exhibition of Frank Auerbach in autumn 2015, the display of Lucian Freud’s collection (25th August to 9th November) is giving us a taste of what’s to come.

83 year old Auerbach is a fascinating figure, best known for loading his canvases with thick layers of paint, much to the disdain of critics who saw him as more of a sculptor than a painter. Interestingly German-born Auerbach was sent to England as a boy by his Jewish parents, who were later killed in a Nazi concentration camp.

The Camden-based artist has always possessed an ardent love for the London landscape and repeatedly paints images of his local area. In this collection visitors will be able to see key works such as Rebuilding the Empire Cinema, Leicester Square 1962 and Mornington Crescent – Winter Morning 1989, which express this fascination as well as Auerbach’s awareness of the rebuilding of London post Second World War.

He is also known for his portraits of friends and relatives, notably his wife Julia and his principal model Estella Olive West. Auerbach has constantly returned to these two subjects in his attempts to express raw sensation.

Freud was a particular friend of Auerbach, evidenced by the displayed birthday cards exchanged between the two artists. His private assortment of works therefore offers us a valuable insight into the life of the artist, from his student days in the 1940s at the Royal College of Art up to 2007. The collection itself was given to the nation after being acquired by the government in lieu of inheritance tax following Freud’s death in 2011.

So if you can’t wait to see the unique energy of Auerbach’s mark making or the physical impression of his paint on canvas, the Tate Britain’s display will help to satisfy you. At least until next autumn…

Want to read more? Members enjoy full access to all Culture Whisper's arts previews, exclusives and features. Click here to take our cultural quiz and get a month's free trial