Iconic, individual and bold, Henri Matisse’s paper cut-outs are among his best and most ingenious work, made between 1936 and 1954. 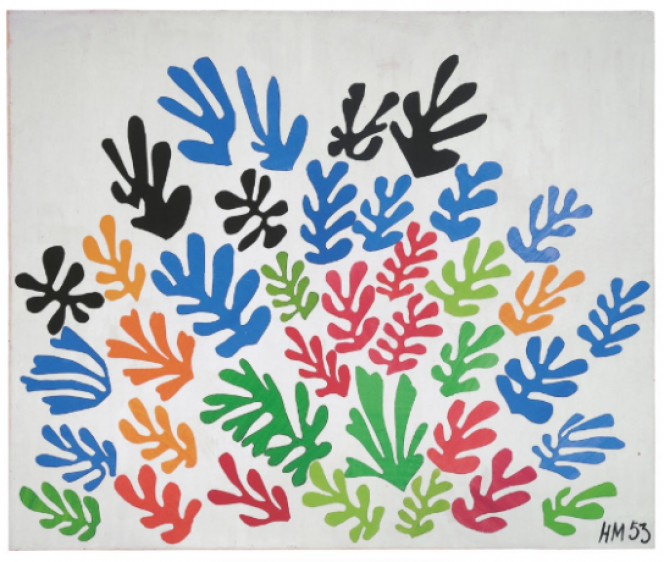 Iconic, individual and bold, Henri Matisse’s paper cut-outs are among his best and most ingenious modern art, made between 1936 and 1954. The pieces, on display at the Tate Modern - one of the best-known art galleries London has to offer -  from April , belong to his last phase, and he considered them the culmination of his life’s journey, saying “ I have needed all that time to reach the stage where I can say what I want to say .”

In 1941 Matisse was diagnosed with cancer and began using a wheelchair. He survived a risky operation, and considered the last 14 years of his life a blessing and a rebirth. His fragile health, however, meant painting became difficult. He and his assistants would paint large sheets of paper with monochrome gouache, and Matisse would cut out large, sensuous shapes and pin them to a white background, enabling him to make slight adjustments to the composition without a strenuous repainting process.

The result is beautiful, elegant, simple work – Matisse called it “painting with scissors” – reminiscent of his fluid earlier drypoint engravings, but on a huge, fresh, vibrant scale. Interestingly, he used a similar technique to create stained glass; a fact worth bearing in mind when looking at these. They are so bright looking at them is like looking at something shot through with light. So revolutionary were they that they even made his long-time rival, one Pablo Picasso, jealous.

This show will feature a large amount of his famous 1950s Blue Nudes , and will be the largest exhibition of Matisse cut-outs to date. It will also feature his 3 metre-square 1953 work The Snail , owned by the Tate Gallery and sorely missed from the walls of the Tate Modern art gallery since an otherwise brilliant re-hanging. Whether you agree with Matisse’s own assessment of the last phase of his work – that it was both his best and most truly “him” – or not, his declaration to this effect alone makes the London art exhibition worth seeing. We reckon we will be going, on average, once a week.