From 1981, the Neo Naturists: two sisters, Christine and Jennifer Binnie and contemporary Wilma Johnson, started experimenting with body painting. They painted each other and used accessories: a plastic crab, some Sellotape, not to cover but to accentuate their canvases.

Their movement began in Central St Martins school of art and design, as the last mismatched chords of punk dissipated in bereft London clubs and the New Romantics were just shaking out their ruffles. It was an unfashionable, hippie counter-movement that should be credited for its stubborn refusal to conform: "Neo Naturists are not interested in making themselves look like something else; they want to look like Neo Naturists,” declared their 'manifesto', a colourful account of the formation of the group that doesn't take itself very seriously: "Neo Naturists are casual to the point of excess and should have a good repertoire of casual leans, stands and walks for special occasions." 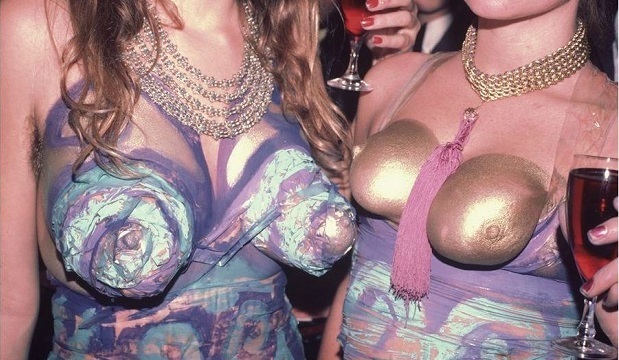 Peter Doig, Grayson Perry (onetime boyfriend of Jennifer) and Boy George (of the Blitz Kids movement), as well as a host of other arty names, were peers and collaborators. The group last interacted with the public at the Hayward Gallery in 2012.

The highlight of this exhibition will be the videos of their performances. Often uninvited, the painted clan arrived at London clubs and galleries, including the British museum. This will be the first formal exhibition that tells their story: as such, there are plenty of flyers and press cuttings from the Neo Naturist archive.

The message is still relevant today: in a world where online self-expression sits uncomfortably next to online body-shaming, this exhibition reminds us of the power of the human body. It's also a relevant take on performance art and on counter-cultures and how they continuously mix with the London cultural scene: "We had art at our fingertips and we smeared it all over our bodies". Glorious.

An A to Z of things to look forward to in 2022
Sign up to CW’s newsletter
By entering my email I agree to the CultureWhisper Privacy Policy (we won`t share data & you can unsubscribe anytime).