The images in this exhibition are some of Goldin's most iconic. Taken in strip clubs and bars, dimly lit apartments and doorways, these photographs show people in various states of undress, flirting with the camera, or, more often than not, carrying on as if it is not there. Goldin is, after all, part of their world, part of the furniture, and they are her 'community'. Through this intimacy, truths emerge and her gay, straight and transgender friends appear strong and vulnerable, glamorous and fragile all at once.

These photographs are from the 70s, 80s and 90s. Many have been compiled into slideshows and set to music. Relationships emerge, faces age and life-forces dim as tragedies unfold. The Other Side is once such compilation, originally made in 1994 and newly edited for this exhibition. It is, Goldin says ‘a record of the courage of the people who transformed that landscape to allow trans people the freedom of now.’ And the intimacy, hedonism and sorrow contained in these photographs is hugely compelling.

Salome (2019), a three-screened installation, inspired by the Biblical story of the woman who asked for John the Baptist’s head on a plate in payment for dancing for King Herod, provides a trippy cabaret of a triptych, an irresistible whirr of glamour and sexuality. A favourite subject of Baroque painters, Goldin transforms this tale into a humorous and disorientating spectacle. 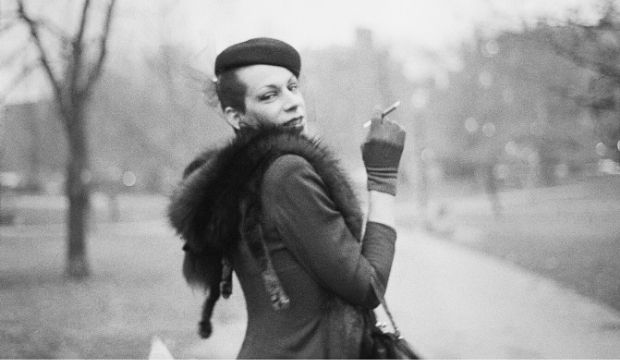 In the 1980s Goldin lost a great many friends to Aids. Now, there is a new threat. Memory Lost (2019) is a slideshow of images set to a soundtrack composed by instrumentalist Mica Levi and it recounts the dark journey of drug addiction. After fighting her own battle with addiction, Goldin is heading up the battle to save those caught up in the opioid crisis sweeping America, determined that the apathy of the 80s will not be repeated. ‘I can’t stand by and watch another generation disappear,’ she told the FT this year. Although small in number, her group, PAIN (Prescription Addiction Intervention Now), has drawn international press attention.

It is now well known that the pharmaceutical company Perdue Pharma manufactured a highly additive prescription painkiller called OxyContin. OxyContin is credited with fuelling a crisis that caused around 400,000 deaths between 1999 and 2017, and that number continues to rise. It was this very drug that Goldin was given for a hand injury, and it nearly ended her life. Purdue Pharma is owned by one branch of the Sackler family, which donates huge amounts of money to art galleries and museums across the world. Due in large part to Goldin’s public protests at these institutions, many have started to refuse future donations from the family.

Upstairs, the impressive, high-ceilinged gallery space contains Goldin's photographs of skies taken in the 2000s. This room acts as a sort of visual palate cleanser, a calming, cathartic space in contrast to the clamour of personalities in the galleries below. These are meditative images, scenes shot out of windows and in the early hours.

This exhibition is not only hugely evocative and poignant, but also relevant for the world we live in now. In the dazzling scenes played out in front of the camera the past meets (and haunts) the present. To walk among these images is to step into an enchanting, heady and sometimes tragic world of love and loss. There is something irresistible about the call of Goldin's sirens, and you may well find yourself returning to hear them sing again.