Collated between 1760 and 1880 by the first four Marquesses of Hertford and Sir Richard Wallace, the illegitimate son of the 4th Marquess, the collection boasts masterpieces by French Masters Greuze, Watteau, Fragonard, and Boucher, and ornate furniture by Boulle, Riesener, and Carlin. Bequeathed to the nation by Sir Richard's widow in 1897, Hertford House dazzles with ravishing relics from its eclectic past.

TRY CULTURE WHISPER
Receive free tickets & insider tips to unlock the best of London — direct to your inbox
This winter, The Wallace Collection brings to London a number of Spanish masterpieces form the collection of John Bowes (1811-1885), another magnificent nineteenth-century collector. Spanning three centuries, El Greco to Goya - Spanish Masterpieces from The Bowes Museum, is an intimate exhibition exploring one of the largest and most prestigious collections of Spanish art in Britain. 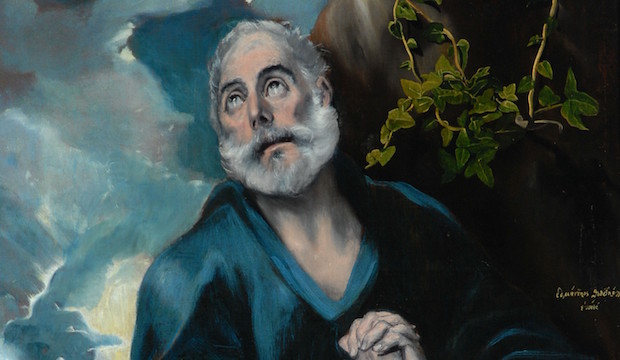 Like Sir Richard, John Bowes, was also the illegitimate son of an aristocratic father. Heir to his father's immense fortune — but not to the Strathmore Estate in Teesdale — Bowes and his French actress-wife Joséphine, poured their money into art collecting. With the help of prestigious French dealer, Benjamin Gogué, they acquired more than 15,000 objects during their lifetime. To house their prestigious collection of Spanish paintings, the couple built a purpose-built estate in County Durham. Following his death in 1872, the collection was bequeathed to the nation.

El Greco to Goya is a small exhibition – there are only thirteen paintings on display – but it is truly exquisite.

El Greco’s The Tears of Saint Peter, 1580s – thought to be the artist’s ‘prime original’ according to The Wallace Collection Director Xavier Bray – is one of the most captivating oils in the exhibition. A penitent Saint Peter clasps his hands in prayer as he repents his betrayal of Christ. The painting intrigues with its rich iconography: in the background we see a cracked tomb representing Christ’s Resurrection, to the right of the tearful Saint Peter, we see climbing ivy, symbolic of hope and everlasting life, and, in the background a flash of spiritual light. 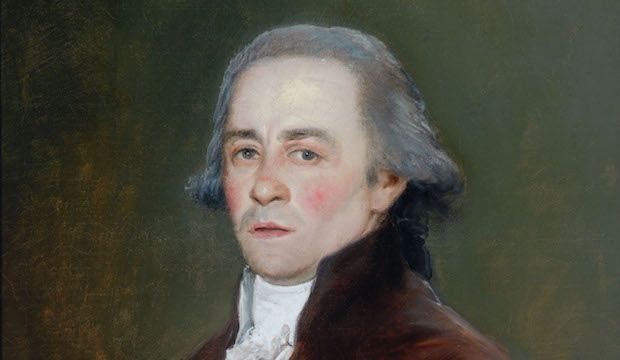 Each and every painting in the exhibition tells a powerful story. The two Goyas, hanging opposite The Tears of Saint Peter, tell the most poignant. The realist portrait of Goya's friend, poet and prison reformer, Juan Antonio Meléndez Valdés, 1797, is one of the most revered examples of Goya's portraiture in the UK.

Depicting one of Spain’s ilustrados, the painting serves a historical reminder of a short-lived period in Spanish history known as the 'Spanish Enlightenment'. Following the French Revolution in 1789, Melendez Valdes, together with other influential governmental ministers, fought for social and judicial reforms. In 1814, when the Spanish monarchy was restored, Melendez Valdes was removed from his post. Forced to flee Spain, he died in poverty three years later.

The sitter’s scruffy hair, parted lips, droopy eyes and ruddy cheeks demonstrate Goya’s characteristic honesty and reluctance to flatter his sitters. Gazing straight at the viewer, the sitter’s eyes penetrate our own. It's hard to tear your eyes away from it.

Moving from prison reformer to prison interior, Goya’s Interior of a Prison, 1793-4, is equally arresting. Originally part of a series of twelve small ‘cabinet pictures’ produced on tin-plate, this delicate oil plunges the viewer into the barren but grimy interiors of an eighteenth-century Spanish prison. Preoccupied with the representation of human suffering, Goya’s oil highlights the wretched and inhumane conditions in which the tormented prisoners live.

Clothed in torn rags and weighed down by iron chains, the misery of his condemned subject chills to the bone. Goya shared the beliefs of contemporary Enlightenment thinkers who advocated human rights and sought reform of penal regulations, and thus depicted the plight of prisoners on numerous occasions. 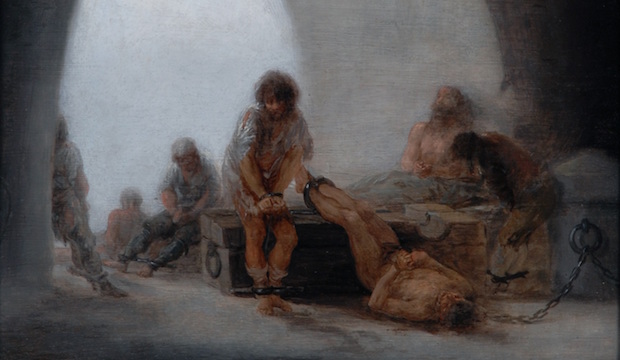 But beyond the Goyas and El Grecos, are glorious paintings by less well-known, but equally masterful Spanish painters. Antonio de Pereda’s, Tobias Restoring his Father’s Sight and José Antolínez, The Immaculate Conception, 1668-70, are amongst the most alluring on view. It’s easy to forget, amidst the ecclesiastical subject matter, that Spanish eighteenth-century painters were also superb colourists. The cobalt blue drapes worn by the Virgin Mary, the pink skin of the cherub-angels, and the verdant foliage mesmerize with their popping vibrancy.

Chosen to explore an era of social, religious, and political upheaval in Spain, the exhibited works highlight, above all, the changes in style and subject matter during this tumultuous period. While Spanish old masters and eighteenth-century decorative arts might not be everyone's cup of tea, it's worth seizing the opportunity to witness the dark, chilling dramas staged within the frames of the Bowes' ferocious collection — even if it's just in passing. 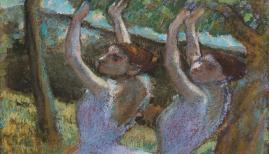