It’s a shrewd decision from screenwriter David Nicholls to invert books one and two of Edward St Aubyn’s quintet, reeling us in with the razzmatazz and chaos of Benedict Cumberbatch playing drug-addled Patrick before delving deep into childhood memory. Never Mind is a total tonal shift, a study of slow rot and sudden shocks seeping from one generation to the next – and a taste of the trauma that infects Patrick's adulthood.

With a beguiling mix of beauty and brutality, the camera pans out from ripe figs moldering on a sun-dappled terrace to capture the chateau in all its glory. The whole show is shot through with dreaminess; time bleeds away into summer days where father, mother and son rattle around in this grand house, leading lonely lives with no employment, pressure or structure.

Over the course of a single day, as guests arrive for dinner, we see gradual decay, immediate abuse and the embodiment of Philip Larkin's assertion that 'They fuck you up, your mum and dad'.

The dad in question is David Melrose (Hugo Weaving), who patrols in his silk dressing gown blithely bullying anyone in his path. Clipped politeness is undercut with cruelty: he fixes the housekeeper in conversation until she squirms with discomfort; he forbids everyone from comforting his desolate young son; and David's sadistic grip over his wife is played out through dinner time chitchat. 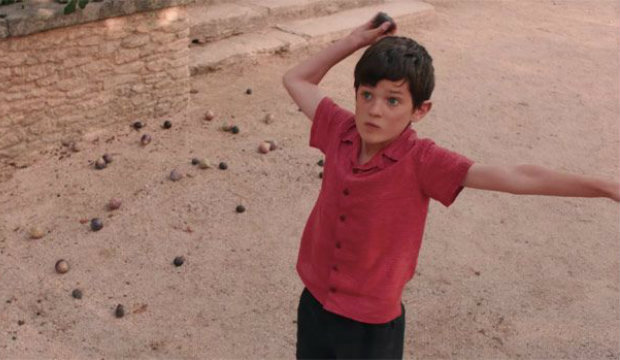 Patrick is a solemn, mostly silent child who plays alone in shady corners of the garden, teetering at the edge of the well, hiding among the vines and sometimes begging his mother for affection and protection. Jennifer Jason Leigh as Eleanor Melrose gives a suitably brittle performance, showing us a woman hollowed out by abuse, drained of spirit and dulled by a diet of pills of booze.

The gaggle of guests are too self-absorbed or frightened to delve into the twisted roots of Melrose family life. We feel culpable in their willful ignorance and powerless to make any changes.

And, when it comes, the abuse feels as inevitable as the death toll of a Shakespeare tragedy. Flashbacks to the adult Patrick, retching his way through cold turkey heroin remission, reinforce its legacy. Over the next three episodes we'll explore the possibility and limitations of recovery.