This Agatha Christie adaptation is slow but full of intrigue

TRY CULTURE WHISPER
Receive free tickets & insider tips to unlock the best of London — direct to your inbox
This murder-mystery is set in the candy-coloured world of 1950s opulence: Bill Nighy stars as the eccentric amateur Egyptologist Leo Argyll, whose wife Rachel (Anna Chancellor) is brutally murdered. Their large brood of adopted children, now grown up, must deal with the fallout.

The members of the younger generation are played by some notable actors: Eleonor Tomlinson (Poldark) and Anthony Boyle (Harry Potter and the Cursed Child) star alongside Matthew Goode from A Single Man and The Imitation Game. In typical Christie-style, everyone has something to hide.

Ordeal by Innocence, based on the 1958 novel, is the third Agatha Christie story to be adapted for the BBC by screenwriter Sarah Phelps following And Then There Were None and The Witness for the Prosecution. She successfully gives these detective stories a modern touch by drawing out the darkness within the narratives – this adaptation is no exception. It’s extremely visual, with lingering shots and minimal dialogue: clues are revealed by the camera. All of this makes Ordeal by Innocence an intriguing watch.

This big budget drama is slow but full of secrets: as with all good mysteries we are left trusting in very little. Luckily, we don’t have to wait too long to find out more. 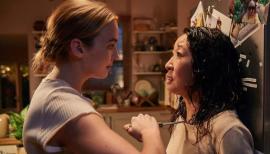